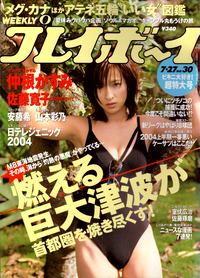 An interview with Hirohiko Araki and Sam Raimi about Spider-Man 2 from the July 2004 issue of Shueisha's Playboy magazine.

It's finally open to the public... And now a courteous interview with the director

"Spider-Man 2" is already breaking records one after another in the United States, surpassing its mega-hit predecessor. It's finally released in Japan, and it's definitely a must-see movie this summer!! Thus, we present a memorable conversation between the director and a popular writer who has been a big fan of his early works!!

A new work that fully demonstrates the horror expert's charm!!

Araki: Having finished "Spider-Man 2", I can honestly say it was just as good as the first one.

Sam: Thank you. I was also shown your work, Araki, and it was quite wonderful. I was really impressed.

Araki: Oh, please (laughs). On the other hand, I do think Spiderman 2's direction was more relaxed than the previous one.

Sam: That's for sure. I felt like I was making an independent work like in the old days. It's a strange thing to say considering the budget (200 million dollar production, a record high!), but I had a lot of freedom.

Araki: I've always been a big fan of your taste in direction. For example, small scenes such as when the nails screeched from being dragged left an impression.

Sam: You're very perceptive (laughs). When I saw your work, I had a feeling you'd be the type to notice those kinds of moments. I'm proud to say now that the skills I've cultivated as a horror writer can still be put to good use here and there. I wanted the audience to be frightened with how scary the villain was, so that was a method I used to show suspense and make your heart race. Maybe that's what reminds me of my old works.

Araki: I know what you mean. Another characteristic of your works is how they depict the process of 'breaking down'. There's physical destruction too, but I think the process of shattering the character's spirit is especially evident. The same thing happened in "The Evil Dead" and "Darkman". In "Spider-Man", the main character, Peter, fell into a slump.

This summer's most talked-about film features a charismatic big shot with a unique power.

Sam: That's a very interesting way of looking at it. I've never thought about that before, but I guess I'm definitely drawn to main characters that have mental weaknesses and flaws.

Araki: Mental stress made Peter lose his web,[1] so to speak. The zombies in "The Evil Dead" were also afraid of their minds being broken from being possessed by evil spirits. In "Darkman", his mind was rapidly changing. I think that's the appeal of the films you direct.

Sam: Actually, I'm very interested in the fact that people make mistakes. Although it's a really tragic thing, it's wonderful when people are able to get back up and feel a sense of accomplishment from succeeding in something after. I think that's basically the story of "Spider-Man".

Araki: That's especially the case this time around. That's why I'm looking forward to seeing Peter's best friend, Harry (in the previous film, his father was killed by Spider-Man after turning into the Green Goblin). Most of your films have characters wearing masks, but I'm curious about why you keep removing them? It almost seems like you want to get rid of the masks (laughs).

Sam: You're right. I did the same thing in this movie as well (laughs). My intention is to show the audience the character's face and make them look into their eyes, so they can feel the pain and emotions that the character is feeling at that moment. That's why I have them torn off.

Araki: I felt that in "Darkman" as well. Though I think one of the most appealing things about "Spider-Man" is the misunderstandings from the people around him since his true identity hasn't been exposed. I'm worried that if you direct the next 3 films, you'll have a hard time (laughs).

Sam: I'm currently planning the next one in my hotel room. I'm having a very hard time. If you have any good ideas, please contact me in my room this evening (laughs).

Spider-Man is a sad romantic drama for boys?!

Sam: Even so, you seem like you'd be great as a CGI artist, Araki.

Araki: I'm more interested in drawing... (wry smile). I feel like the reason I became a manga artist was because of Gauguin and Jasper Johns. What made you interested in directing?

Sam: Honestly, I wasn't influenced by anyone's 'masterpiece' or anything. My father had a 16mm camera, and when I first saw my first 'home video', I was amazed. You could capture and recreate reality, as well as alter the order of events and mess with time. I wondered if it was possible to have such a thing in the world.

Araki: Your attraction to movies itself came from the magic of videos?

Sam: Exactly. Therefore, I think the challenge with my first film was how I could use that as a medium. What can I give to the audience with cutting, camera work, lighting, and sound effects?

Araki: Your direction has had a great influence on my works. For example, if something is reflected in a character's eye, the 'camera lens' will zoom in on it.

Sam: When details like that are depicted properly, it helps bring life to the work. You get the sense that it's actually depicting a real human memory. Your framing in particular is fantastic, Araki.

Araki: Thank you (laughs). Do you sense any difference between Japanese manga and American comics?

Sam: American comics tend to have too much detail, giving them a very chaotic look. I find Japanese manga to be a bit more clear-cut in what it's trying to express; it's very simple and elegant by nature. Story-wise, comics cater to a rather limited audience. I think it’s wonderful that manga considers a much broader demographic and involves many people.

Araki: CGI's becoming more of a thing in movies, though. It's going to be very difficult to adapt manga unless the medium starts using more wide-angle shots.

Sam: Your works are very dynamic, Araki. I think they have an extraordinary amount of originality. The fact movies influence them, that's a good thing. Though these days, I'm becoming more interested in the people and the stories themselves. I'm also beginning to understand how the technical side of things can be used as tools of expression.

Araki: Is that so? As someone who writes stories myself, I'm quite a fan of "tragic love", which was a big aspect of what I liked about "Spider-Man." It would have been great if, at the end of "Spider-Man 2," you did something like "The Graduate," where Mary Jane is a bride who gets snatched away (laughs).

Araki: I did like how the movie ended on a somewhat solemn facial expression, as if the future seemed uncertain.

Sam: I made MJ have a sad expression by putting myself in her shoes. Romance is something that I personally love very much, and it seems that my interest in it melded into this film. Now that I think about, the original comics are also essentially a 'romance' story for men. American boys are too shy to read plain love stories. Is that the case in Japan?

Araki: I’ve liked those type of books since I was a kid. Rather than seeing a happy ending, Japanese people like it when they’re torn apart by fate, so it’s nice that even "Spider-Man" has the feeling of wanting to cry. Love is a painful thing (laughs).

Sam: Do you convey that to your readers through your work?

Sam: So you're an expert on love (laughs). I don't have that much experience myself.

Araki: Oh, really (wry smile). Anyways, I'm glad I was able to talk to you today. I'm looking forward to "Spider-Man 3". You'll be directing it, right?

Sam: That's the plan. The other day I overheard the higher-ups of the movie company talking about making up to six, and I was so shocked that my heart stopped (laughs).