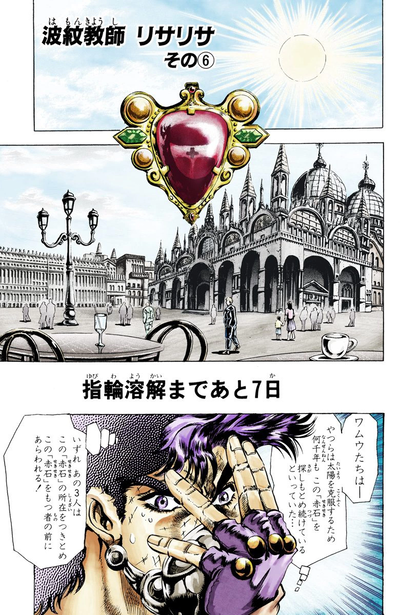 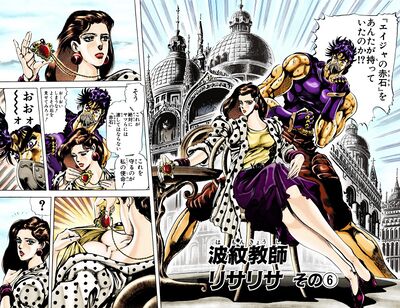 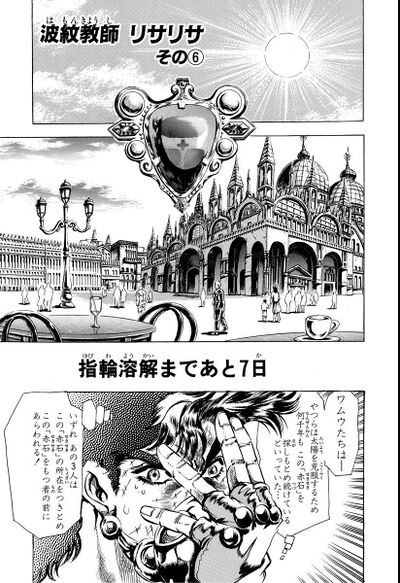 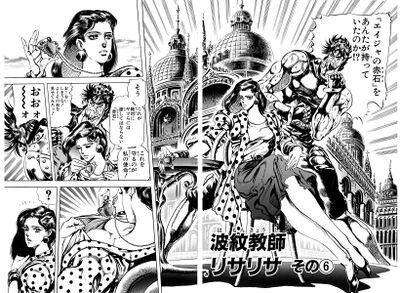 7 days before the rings in Joseph melt, Lisa Lisa reveals the Red Stone of Aja to Joseph and decides to tell him and Caesar the history behind it. The three Pillar Men are beings of unknown origin, though reports say they appeared in human history 5,000 years ago. They were the creators of the Stone Mask, a device they tested using hundreds of thousands of humans as test subjects. The Pillar Men's primary goal was to wear the Mask themselves, so they could withstand the sunlight. By doing so, they would become perfect life forms.

A flashback shows Kars is sitting at a table contemplating. He explains that the bone spikes of the stone mask can push human brains to their limits, but are unable to puncture the brains of Pillar Men. Only by infusing a Stone Mask with a perfect red stone could they hope to advance. Apparently, the Roman emperor had such a stone long ago, which was now in the hands of Lisa Lisa.

In the now, Lisa Lisa, Joseph and Caesar are riding a boat back to Air Supplena Island. Lisa Lisa demonstrates the power of the stone by holding it up to the sun and charging it with the Ripple. A beam shoots out from the stone and hits the boat, causing the rear end to explode. Lisa Lisa explains that the Ripple warriors from long ago learned about the stone and the Pillar Men's goal. After numerous battles, the clan was wiped out, but they managed to keep it safe. Joseph proposes that they should simply break the stone, which would thwart the Pillar Men's efforts but Lisa Lisa explains that there is a legend that states that destroying the red stone would make defeating the Pillar men more difficult. As the boat nears the island, she tells Joseph and Caesar to prepare for their final test.

At night, Joseph walks down the path to the arena where his final test awaits. Both he and Caesar have spent 3 weeks training and now must fight their respective masters: Joseph vs. Loggins, and Caesar vs. Messina. The time is right before dawn and the sun is almost gone. Joseph enters the courtyard, only to find Loggins' hat on the ground covered in blood and a mysterious figure standing on top of a statue. Joseph realizes that there are two people and one of them is carrying the other with a single leg. The one impaled on the other's leg was the corpse of Loggins and the one who had killed him was the Pillar Man, Esidisi.

Author's Note
“
I've been buying a lot of CDs lately, but they've all been old rock bands from a decade ago. I must be getting old.
”
—Hirohiko Araki
“
最近よくを買うが、自然と10年以上前の古いロックばかり買ってしまう僕も歳かナ。
”
—Hirohiko Araki