A summary of Kars's history and movesets in video games. 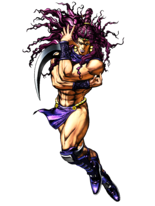 Kars makes his first appearance as a playable character in the PS3 title. He was confirmed alongside Rohan Kishibe. In the English release of the game, Kars's Light Blades are called "Shining Sabres" (keeping the alliteration of the Japanese name).

Most of his normal attacks consist of regular punches and kicks. Along with Wamuu and Esidisi, Kars uses the Mode style as part of his moveset, which allows him to temporarily boost his strength and performance among other things, at the cost of the Heart Heat Gauge. Kars has 900 HP.

Kars also appears on the stage "The Battlefield" as a background character along with Lisa Lisa. If Wamuu is one of the combatants in battle, Kars will brag about Wamuu's strength, assuming that Kars himself is not part of the fight.

Kars also possesses two alternate costumes, the first one being the attire he usually wears and is seen in for the first half of his presence in Battle Tendency (the veil that covers his long hair), and the second one being the overcoat and large hat he wore in Switzerland, in his fight against Stroheim.

ON GROUND
Kars can activate Light Mode in order to not only increase the overall damage of his moves, but exclusive to him, make his Lightblade attacks unblockable. The Heart Heat Gauge slowly depletes while this mode is active, and as such, this mode will last until the HHG empties, or it can be freely canceled with another press of the Style button.
Shining Sabres Mode

ON GROUND
Expending a stock of the HHG grants Kars access to Shining Sabres Mode, strengthening his abilities even further, increasing the range of Lightblade-based skills, and increasing the amount of hits dealt by his attacks, improving his combo ability. This mode is on a set timer, and will end when the stock is used up.
Sabres from my feet?!

ON GROUND
Kars kicks forward as a blade comes out of his foot. A command normal that can chain into Kars' skills. (Comboable)
Special Moves
Cruel and beautiful violence

ON GROUND
Kars dives forward, arm blade extended, to slice through the opponent, and follows up by swinging upward to knock them into the air. (Comboable)
Behold, frozen brilliance!

ON GROUND
Kars, in a single motion of his arm, unleashes multiple slashes in front of himself with great range. (Comboable through Puttsun Cancel)
Shatter against the wall!

ON GROUND IN AIR OK
Kars performs an airborne reverse kick that sends the opponent flying into the stage wall. This move can be used in mid-air.
Victory is everything!

ON GROUND
Kars utilizes light to disappear, with his subsequent reappearance depending on the type of button inputted.
Throw
I'll slice you in two!
2 ATK buttons at close range or

ON GROUND
Kars, using his arm blade, cuts the opponent down the middle before sending them away.
Heart Heat Attack / Great Heat Attack
Shining Sabres

+ 2 ATK Buttons ON GROUND
Kars licks his Lightblade before unleashing a large, shining array of slashes done in a single movement of his arm. If they successfully hit, Kars slashes while moving past the opponent in a samurai-esque fashion and brings his arm down. After a short delay, the opponent suffers a final, gashing blow. Kars may perform his HHA while Shining Sabres Mode is active, regardless of how much of the Heart Heat Gauge he has left. Doing so however, will drop his HHG to zero.
I am the Ultimate Thing!

ON GROUND
Kars dons the Stone Mask in combination with the Red Stone of Aja to attempt to turn into the Ultimate Thing. Kars, from the ground, will slowly rise to his feet. If the animation fully plays out uninterrupted by the opponent, the mask shatters, and Kars gains a completely new array of moves (it is also one of the longest and most difficult GHA to fully activate, taking about 5 seconds to complete).

Once his GHA is successful, Kars is dubbed as "Kars (Ultimate Thing)" for the rest of the battle and gains a whole new moveset with greater overall range, speed, and damage than his previous state. Ultimate Thing Kars is not entirely infallible. If he falls victim to Kosaku-Kira's Bites the Dust GHA, Kars will revert back to his original form. He also loses access to his HHA, or enter Light Mode and Shining Sabres Mode.

ON GROUND
Kars sprouts wings and takes flight, and can attack while in the air, slowing depleting the HHG.
Aerial Dash/Back Dash
(while flying)

x2 IN AIR OK
Kars quickly dashes forward or backwards. The forward dash can collide with the opponent and act as an anti-air to knock them down to the ground.
Aerial Combo Beat
(while flying)

IN AIR OK
Kars can chain together his aerial normal attacks while in flight.
Shining Sabres

ON GROUND
Kars charges forward and attacks with his Lightblade in one fell swoop. This move cannot be blocked, and is a command normal that can chain into Kars' other skills.
Special Moves (Ultimate Thing)
The power of supreme genes!

ON GROUND
Kars launches projectile attacks from his body that can be used while flying. The resulting attack differs based on button input.
Feast your eyes on my Ripple!

ON GROUND
Kars attacks with Ripple-charged fists, the technique performed determined by button input. (Comboable through Puttsun Cancel)
This cannot be!

ON GROUND
Kars transforms his arm into a large octopus tentacle as he swings it in a wide breadth while maniacally laughing. Its massive size allows it to hit the opponent at most ranges, and sends them flying. If used while the opponent is in the air, Kars will automatically swing it upward as an anti-air.
Throw (Ultimate Thing)
You worthless fool!
2 ATK buttons at close range or

ON GROUND
Kars grins as he grabs the opponent and smashes them between his elbow and knee, before shoving them away.

Kars appears as one of the several Part 2 characters who possesses a Metal Striker. His Finish Move consists of him using his Light Blades and cutting the opponent's defeated Metal Striker. Kars returns as a playable character in Eyes of Heaven, confirmed alongside Wamuu and Esidisi.

As a Pillar Man, Kars has the special ability Switch Mode, exclusive to the Mode style. His specific Mode is Light Mode. He is also able to stand and walk on the spike pit in the Air Supplena Island stage without taking damage (though he will still take extra damage if knocked down onto the spikes). Of special note is that he has the fastest base movement speed of any character.

While in Ground Mode:

While in Flight Mode:

Unlike the previous game, his main color scheme is now based on his anime appearance.

He is paired with Pet Shop in the Eyes of Heaven Tournament. In the preliminaries, they defeated Pannacotta Fugo and Noriaki Kakyoin in the first round, and Dio Brando and Joseph in the second. In the semifinals, they defeated Jotaro Kujo and Kakyoin in the first round, and Jotaro and DIO in the second. Ultimately, the team won the Tournament, defeating Jolyne Cujoh and Gyro Zeppeli in the final round.

Kars appears in Diamond Records as a playable character, both in his original form and in his ultimate form.

Kars's first iteration is playable in both the Action Battle and Tactical Battle game modes. He has one 'Tactical' type 5 star statue. Kars's moveset in both game modes is comprised of various attacks inspired by the anime using his Light Slip Blades and other light based abilities. As a pillar man, Kars constantly regenerates health, but has a weakness to attacks from ripple users. Playing as him will force any outdoor stages to take place at night.
Moveset

Kars's basic attack string is a combination of up to five various attacks comprising of hand strikes and kicks. In Tactical Battle, this is cut down to only three hits.

Kars strikes opponents with one of his blades.

Kars briefly disappears with the light, and reappears in front of opponents, spinning in the air wielding his blades, slicing at the opponents near him. (Unlockable)

Kars unleashes a barrage of strikes using his light blades, ending in a strong, horizontal swing.

Kars opens up one of his light blades, which he uses to swiftly slice through a long range, which hits any opponents in his path. (Unlockable)

Kars strikes an opponent with his blades, as the game cuts to his cutscene. In the cutscene, Kars shows off the light being reflected from his Light Slip Blades, and then proceeds to strike repeatedly at the opponent he had previously hit.

Ultimate Thing Kars is playable in both the Action Battle and Tactical Battle game modes. He has two 'Solitary' type statues, one 5 star and one 6 star. Ultimate Kars's moveset in both game modes is comprised of various attacks inspired by the anime using his various transformation abilities as the Ultimate Thing. As a pillar man, Kars constantly regenerates health. Unlike other pillar men, he is not weak to ripple attacks, and additionally he can access the daytime versions of outdoor stages. Ultimate Kars has a unique death animation on the 'volcano' stage, where as he falls down, a chunk of the ground under him will be blasted in the air by a small eruption underneath, as a nod to his defeat in the anime.
Moveset

Ultimate Kars's basic attack string is a combination of up to five various attacks comprising of strikes with his blades, as well as shooting a killer squirrel from his hand on the final hit. In Tactical Battle, this is cut down to only three hits.

Kars jumps into the air, turning his arms into wings, damaging opponents near him, and then proceeds to dive at his opponents.

(Counter) If Kars is hit while activating this skill, he will swiftly shift into his crustacean suit, and counter the opponent's attack with a barrage of punches, ending with him breaking out of the suit and striking with his light blade. (Unlockable)

Kars jumps into the air, turning his arms into wings, damaging opponents near him, and then firing his feathers as projectiles. The feathers will then turn into giant tentacles from the ground that swing around and cause a few more hits of damage to opponents caught in the area. In Tactical Battle, this skill hits all opponents present on the stage.

Kars uses the ripple to deal a powerful strike to his opponents. (Unlockable)

Kars jumps into the air, turning his arms into wings, damaging opponents near him, as the game cuts to his cutscene. In the cutscene, Kars flies around and shows off his wings, then he fires a series of strong projectiles from his wings at his opponents. In Tactical Battle, this skill hits all opponents present on the stage.

Replaces panels in a horizontal line with Kars panels

One Who Stands at the Top ver.
Rarity: 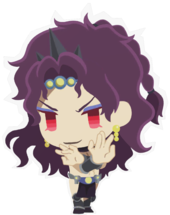 Skill: This is the true battle!

Erases panels in a horizontal line. The Boost Lv increases when using the skill, increasing the number of erased panels (Up to Boost Lv 5 depending on Skill Lv)

Cost: 0
Recharges 20% of his skill gauge after using a skill once (up to 5 times per battle). 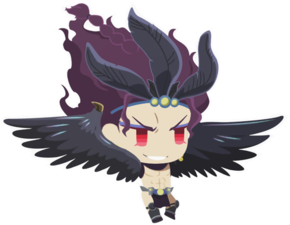 Skill: I rule over all life!

Copies panels in the bottom row multiple times to the area above it.

Cost: 0
After clearing 60 Kars Panels, replaces a random Panel, except for Kars Panels, with an Enhanced Kars Box Panel (up to 5 times per battle).

There is concept art of Kars in JoJo's Bizarre Adventure: Heritage for the Future, indicating that he was originally set to appear in the game during development. Kars is also mentioned by Joseph Joestar in the same game.