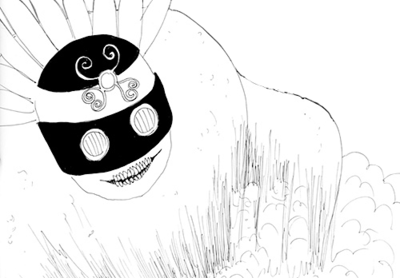 Dune (デューン, Dyūn) is the Bound of Goyathlay Soundman from the 37th universe, featured in the light novel JORGE JOESTAR.

It possesses the ability to absorb sand from any environment and manipulate the sand into different shapes, allowing its user to be invulnerable to most attacks. Kars later mimics the ability with enhanced capabilities, creating larger whirlpools and sand pillars than the original.

Dune resembles its original universe counterpart, In a Silent Way. Although it's entirely made of sand and can transform its appearance, its basic manifestation is a sand monster with a humanoid body. Dune wears clothing based on the indigenous peoples of the Americas, including a war bonnet and a face resembling the Mosaic mask of Tezcatlipoca. The top half of its face is black and has round eyes with lines in them, and its teeth are skeletal. It wears a hide cape covering its whole body.

Soundman's body is almost entirely composed of sand from his native land. His sand can be controlled and manipulated into different shapes. Soundman can also send Dune away from him to gather sand from other environments. However, if the sand travels too far away from his body, it turns back into ordinary sand which he cannot control. He can listen to the sands of any environment such as the sands of Mars and become one with the element, absorbing sand into his body and wearing it like a protective suit. After absorbing the sands of an environment, Dune transforms into a massive pillar of sand.

Dune can create a whirlpool to absorb attacks and projectiles allowing Soundman's body to become impervious to most attacks as long as he is covering his body with a suit of sand. As a downside, if he covers his entire body including his face with sand, he is unable to see anything. His face appears to be vulnerable to attacks if sand is not covering it, as he can be hit by surprise attacks such as Funnier Valentine's bullet.[1] 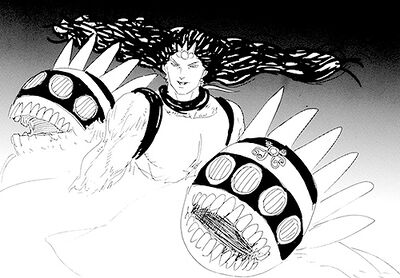 During the final battle with Dio Brando, Kars uses his own version of Soundman's Bound, tentatively named Dune Ultimate (デューン・アルティメット, Dyūn Arutimetto), based on the naming scheme of Kars's other imitated Stands.[2]

Dune Ultimate appears similarly to Dune but has several faces rather than only one. Each face also has four eyes as opposed to two. Its mouth is open more, causing its teeth to appear vicious.

Giant pillar of sand and rubble

Kars's version of Dune is a lot more powerful than the regular version. It creates a giant whirlpool of sand that pulls Dio into it along with large pieces of rubble from buildings. The sand and the rubble combine and constantly expand into a massive pillar that is over 300 meters tall and 200 meters wide. It has a thick density like a giant mortar and Kars describes its strength to be dozens of times stronger than normal buildings.