The Wind, the Chariot, and Wamuu, Part 4 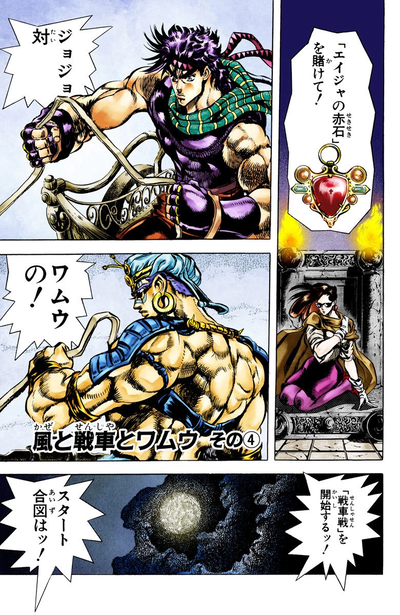 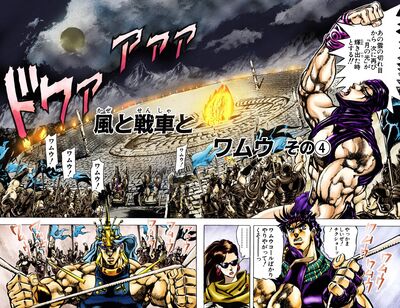 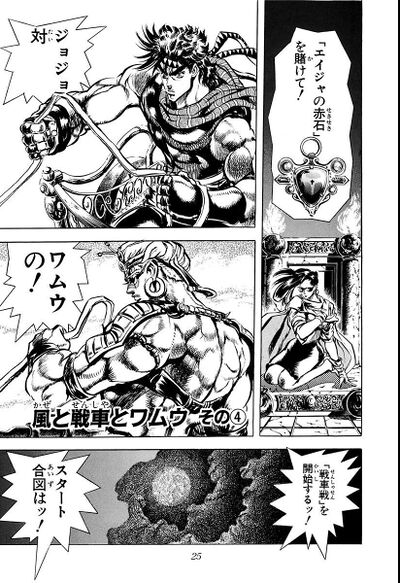 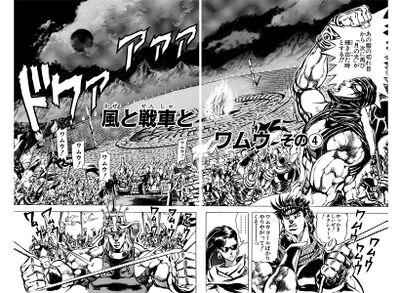 Kaze to Sensha to Wamū Sono 4

The Wind, the Chariot, and Wamuu, Part 4 (風と戦車とワムウ その④, Kaze to Sensha to Wamū Sono 4), originally Moonlight Start! (月光のスタート！, Gekō no Sutāto!) in the WSJ and tankobon releases, is the fifty-fourth chapter of Battle Tendency and the ninety-eighth chapter of the JoJo's Bizarre Adventure manga.

The crowd in the arena chants Wamuu's name in anticipation for the race. The race around the nine hundred sixty meter long track will be ridden on chariots pulled by Vampire Horses, capable of going sixty kilometers an hour (roughly thirty-seven miles per hour). The first to pass each lap will be given a weapon, the first being a two-handed War Hammer. Once the clouds move out of the way of the moon and it becomes fully visible, the race will begin.

Moments before the race's beginning, while everyone looked to the moon, Joseph scattered rubble under Wamuu's chariot wheel, causing it to stutter when the race starts. JoJo, being in the lead, passes the first lap and grabs the war hammer. With this JoJo believes he has the upper hand but doesn't realize Wamuu is plotting something.

Author's Note
“
We've decided to move to a new studio in December! Even with the new change of scenery, I'll do my best to write Part 3!
”
—Hirohiko Araki
“
12月に仕事場引っ越決定！第3部は、新しい仕事場で、新しい気分でがんばります！
”
—Hirohiko Araki