The Wind, the Chariot, and Wamuu, Part 6 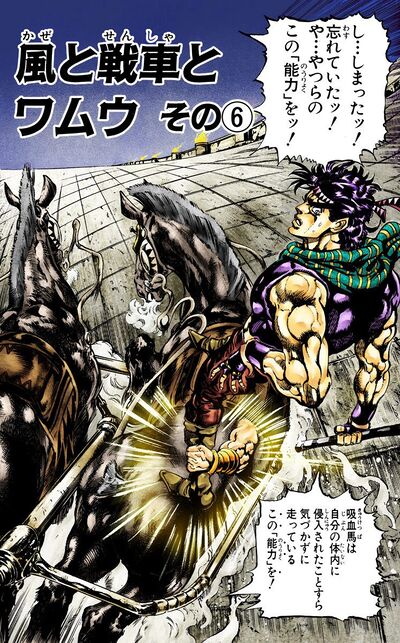 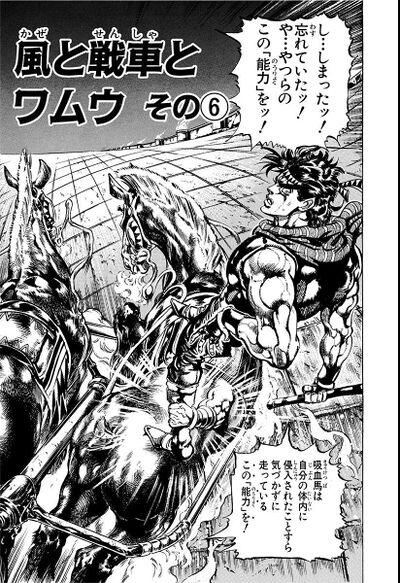 Kaze to Sensha to Wamū Sono 6

The Wind, the Chariot, and Wamuu, Part 6 (風と戦車とワムウ その⑥, Kaze to Sensha to Wamū Sono 6), originally Genius Trickster (天才的イカサマ師, Tensaiteki Ikasama Shi) in the WSJ and tankobon releases, is the fifty-sixth chapter of Battle Tendency and the one hundredth chapter of the JoJo's Bizarre Adventure manga.

Wamuu's hand comes out of the horse and grabs Joseph's leg. Wamuu tries to crushes his leg to prevent him from sending a Ripple into Wamuu's hand, but JoJo leaps off the horse, with Wamuu only holding on to his boot. JoJo lands back on the horses, proclaiming that "Lady Luck" was on his side. JoJo prepares to strike the horses with his hammer, but Wamuu emerges, and, with both hands free, channels his Divine Sandstorm, knocking JoJo into his demolished chariot. With the fight believed to be over, Kars offers to let Lisa Lisa drink a poison and have a painless death, stating that he does not want to fight a woman. However, the fight is not yet over. Wamuu's arms are completely devastated, and JoJo gets up, almost unscathed. Before Wamuu used his Divine Sandstorm, JoJo had wrapped the horses' reigns around Wamuu's arms and flowed a Ripple through it. Never before had someone used the unparalleled destructive power of Wamuu's Divine Sandstorm against himself. The humiliation and the shock left Wamuu speechless.

Author's Note
“
There's a lot of work to do, including drawing the Super Jump one-shot and the poster for the Winter Special! But I'll do my best.
”
—Hirohiko Araki
“
の読切原作やのポスター描きなど仕事がいっばい！でも、がんばるからヨロシク
”
—Hirohiko Araki