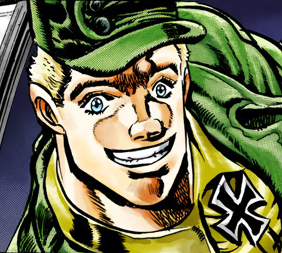 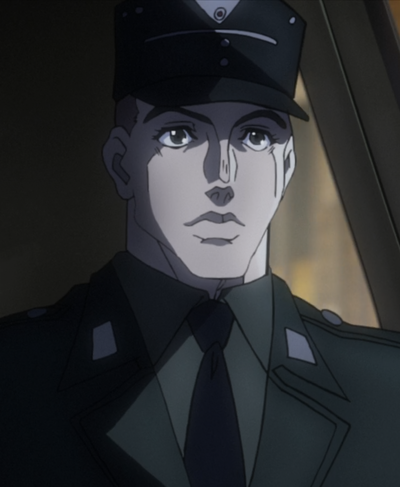 Episode 14
“
Once I go back to Germany next week, we're going to get married!
”
—Mark, Chapter 65: Ultimate Warriors from Ancient Times, Part 1

Mark (マルク, Maruku) is a tertiary ally featured in the second part of the JoJo's Bizarre Adventure series, Battle Tendency.

Mark is a German soldier and a friend of Caesar Zeppeli who drives Caesar, Joseph Joestar, and Robert E. O. Speedwagon to the Mouth of Truth due to Caesar's request. He cooperates with them in hopes of stopping the Pillar Men's awakening. 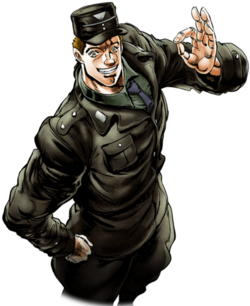 Mark is a young man of athletic build with a wide nose and short, light hair styled as a flattop. As he serves in the Wehrmacht, he wears a soldier uniform along with a ski cap. He also bears the Iron Cross medal below his collar.

The series is known for alternating colors between media, the information presented below may or may not be canon.
Skin(Fair)
Hair(Blond)
Eyes(Cyan)
Outfit
(Army Green uniform, yellow dress shirt, black Iron Cross medal.)

According to Caesar, Mark is a hardworking boy who loves his family, country, and girlfriend.[1] He expresses full enthusiasm for his role as a Nazi and being able to serve his country. Mark plans to marry his girlfriend before the war starts, which makes him feel bashful when mentioning the news to Caesar and momentarily causes him to lose focus while driving.[2]

Mark had been good friends with Caesar for a long time. Caesar had introduced him to a girl back in Germany, and she and Mark were planning to get married before the war.[2] 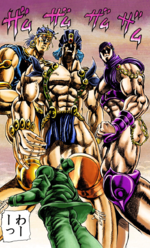 Mark is asked by Caesar to drive him, Joseph, and Speedwagon, to where the Pillar Men are being kept. According to Caesar, the Nazis had been interested in studying the Ripple, and Mark seems genuinely eager for Speedwagon to lend his information to the Nazis so that they could find a way to annihilate the Pillar Men before they awaken.

Upon arriving at the cave where the Pillar Men were found, Mark unexpectedly stumbles upon the three Pillar Men, who had awoken from their slumber long before they arrived. However, it was too late for Mark to move out of the way; Wamuu walks through him, causing half of Mark's body to be absorbed.[2]

His final wish is for Caesar to kill him so that he could die a painless death, which Caesar obliges to by sending the Ripple through his heart. Caesar's resolve for the death of his friend fuels him during his battle with the Pillar Men soon after.[1]