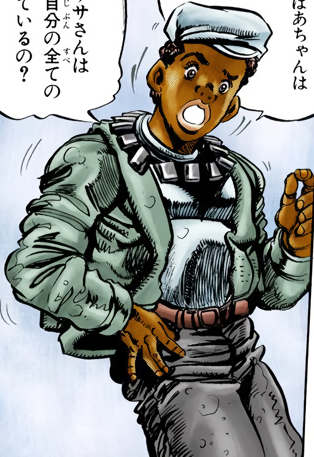 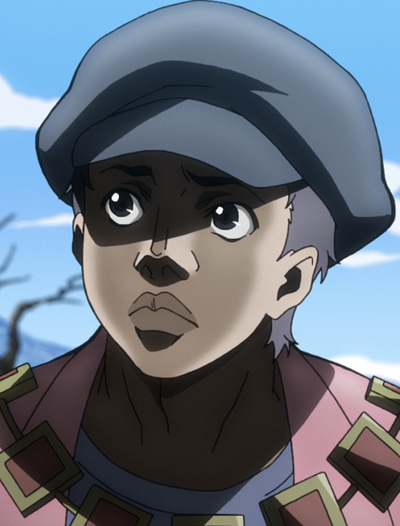 Episode 10
“
What kind of guy is this? He does this to the cops and yet he's afraid of some person named Grandma Erina yelling at him?
”
—Smokey Brown, Chapter 45: Joseph Joestar of New York, Part 1

Introduced as an oppressed New York pickpocket, he is rescued by Joseph Joestar and becomes a friend of the Joestar Family. As a result, he becomes a spectator for Joseph's encounters with Straizo and Kars.

Smokey is a teenage African-American boy of medium build and below average height. He commonly wears a newsboy cap and a shirt jacket on top of a t-shirt. He has short dark curly hair and a braided rattail.

He also wears a necklace with multiple metallic squares chained together, although it is replaced with a bowtie in his first appearance in the anime.

Smokey first appears stealing Joseph Joestar's wallet. Immediately, he is accosted by a pair of New York policemen, who beat and attempt to extort him. To his surprise, he is saved by Joseph, who makes use of his Ripple in disabling the policemen.[2]

Smokey and Joseph running away from Straizo

At Joseph's battle with Kars, Smokey reappears alongside Speedwagon as a spectator. Upon asking Speedwagon, he is informed of the history of Lisa Lisa and George Joestar II.[3] When Kars transforms into the Ultimate Thing and pursues Joseph, Smokey tries to tell Joseph that Lisa Lisa is his mother but fails.[4]

After his adventures with Joseph, Smokey saves enough money for college, where he studied political science. He would later become the first African-American mayor of his home town in the state of Georgia.[1]

In 1950, he was among the beloved family gathered around the deathbed of Erina Joestar, reverently paying his final respects to the woman who gave him a new life.

During the events of the High Priestess story arc, a flyer for a charity peace concert that Suzi Q is attending displays a picture of Smokey, now mayor of New York City, as a sponsor of the event.[5]