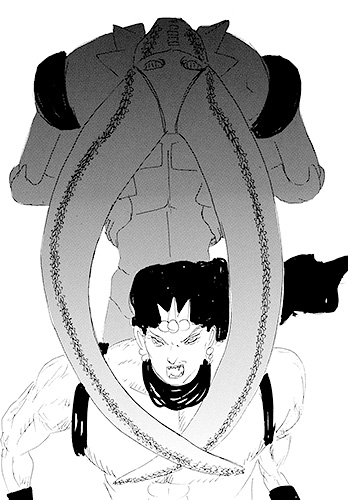 Ultimate D4C's appearance parallels the original D4C with minor differences. It has a humanoid form with large, upright horns resembling rabbit ears and stitches going vertically across each side of its face up to its ears.

Compared to the original Funny Valentine's Stand, its ears are much longer. They curl toward each other, resembling the pincers of a beetle. It also has spikes on its neck.

Kars summons the Stand in an attempt to prevent Dio Brando from fleeing during their battle. However, Dio manages to get away before Kars can attack.[1] As a result, Ultimate D4C's abilities and enhanced dimensional hopping capabilities compared to the regular D4C are unknown.

It seems to be able to create a portal to a parallel world anywhere that anyone can enter through and hide in. Kars, Funny Valentine and George Joestar (Universe O) hide inside a parallel world within Jorge Joestar (Universe 37)'s stomach as a way to surprise Dio during the final battle. Jorge states it was a surprise trick he asked Kars to do, but whether this ability was actually from Ultimate D4C is unknown.

Other languages:
English • português do Brasil
Retrieved from "http://jojowiki.com/index.php?title=Ultimate_D4C&oldid=793143"
Categories: