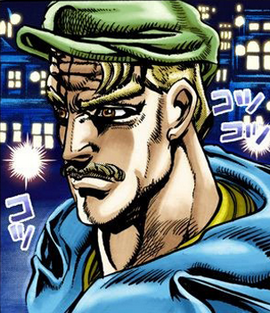 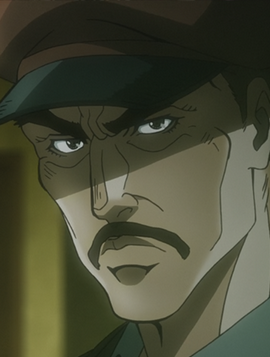 Episode 20 (Flashback)
“
Young man... I have a favor to ask. Report my death to a woman named Lisa Lisa, in Venice... Only she can rival those creatures in this current state of affairs...
”
—Mario Zeppeli to his son, Caesar: A Lonely Youth, Part 2

Mario Zeppeli is a middle-aged Italian, who has a regular haircut and a mustache. In the colored manga his hair is blond like his children's, when in the anime adaptation, it is dark brown. During his first brief appearance on the Zeppeli family tree in Chapter 63, he's presented without his mustache.

Mario Zeppeli is characterized as hard-working, trustworthy, and a wholesome family man. Although he loved his family, Mario had to abandon them in order to investigate the Pillar Men.

Mario was a selfless person, sacrificing himself to save a young man from one of the Pillar Men's trap without knowing it was his own son.

Unlike Caesar, Mario had known since he was young of the fate of his father, Will Anthonio Zeppeli. Because of this, he had researched the Stone Masks, and was able to find the Pillar Men long before Germany's discovery. Since then, he had been traveling the world in order to discover a way to destroy the creatures that were in the wall. Though he had not been shown using it, Mario had spent his life training his Ripple, following in the footsteps of his father.[2]

Mario Zeppeli, son of Will Anthonio Zeppeli, lived in Naples and worked as a carpenter. Considered the best carpenter in the city, Mario had a happy life, having a work he loved and a large family. At one point, Mario's wife died.

Sometime during Caesar's youth, Mario suddenly left his five children without telling them about his investigation on the Pillar Men. Although he left them his money, the money was swindled by relatives and the children ended up penniless. Caesar felt betrayed and grew to hate his father.

Years later, Mario would head to the site where the Pillar Men were discovered, unknowingly trailed by his bloodthirsty son. When Caesar stops to pick a jewel from the wall, Mario saves him by pushing him out of the way of Kars’ trap, and becomes absorbed into the wall. Before he's absorbed completely, he tells his son to report his death to his colleague, Lisa Lisa, as she was the only one capable of rivaling the creatures. This selfless act earned him Caesar's admiration postmortem, and caused him to seek revenge against the Pillar Men.