Made in Heaven Ultimate Requiem

Made in Heaven Ultimate Requiem 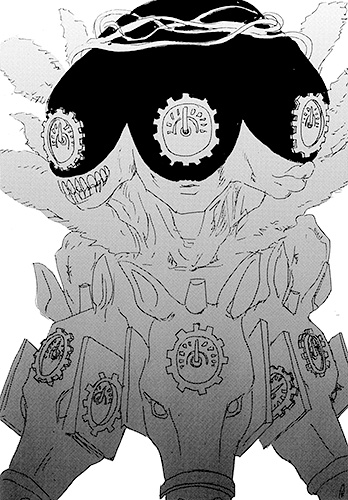 Made in Heaven Ultimate Requiem (メイド・イン・ヘブン・アルティメット・レクイエム, Meido in Hebun Arutimetto Rekuiemu) is a Stand that is an enhanced version of Made in Heaven, featured in the light novel JORGE JOESTAR.

Like its predecessors, its middle head has the same face as the original Made in Heaven, its right head has skeletal teeth, and its left head has large protruding lips. Each head is elongated longer than the original Stand. The heads are black at the top with the remainder of its faces and body being white. The three heads are connected by a long vine.

Each humanoid head has a large speedometer in the center of their face, whereas each horse head has one on their foreheads and on the sides of their blinkers. Large feathers protrude out of its wide neck.

The true capabilities of Made in Heaven Ultimate Requiem and how it differs from the regular Made in Heaven is not clearly depicted, but it appears to accelerate time faster than the original. Dio Brando uses it to escape to another universe where he can find a new body. After its activation, time accelerates dramatically, looping through thirty-seven universes in the future. The sky strobes with the sun, moon, and stars spinning around everyone, and there is a blinding light and pitch darkness each time the universe ends and begins.

Made in Heaven Ultimate Requiem also seems to be able to target an individual and speed up time for only them. Kars uses it on Antonio Torres so that he would constantly create new clones from his Wound ability as a way to prolong the death of the giant Antonio, whom they needed to stay alive for a little while longer. Jorge Joestar also suggests that Kars could have used it on himself to shrink his perception of Bites the Dust's explosions.

Other languages:
English • português do Brasil
Retrieved from "http://jojowiki.com/index.php?title=Made_in_Heaven_Ultimate_Requiem&oldid=793140"
Categories: