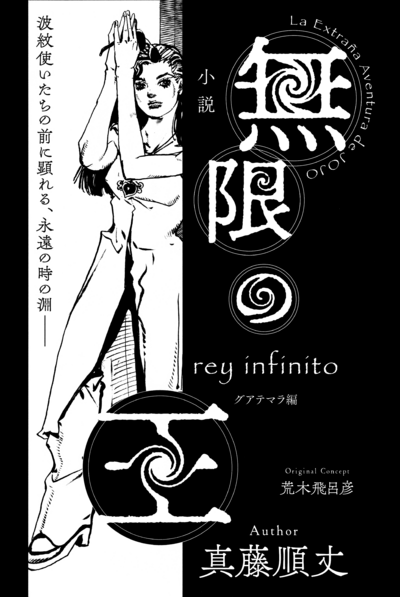 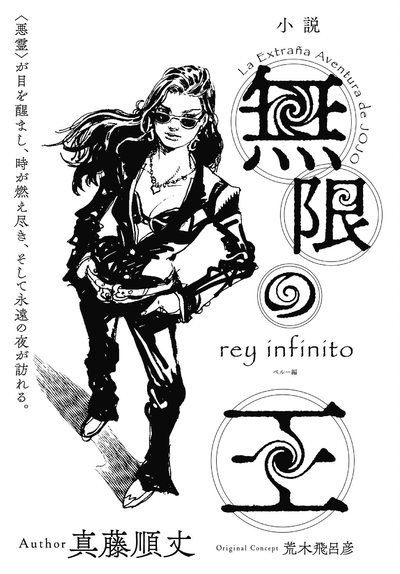 Set between Battle Tendency and Stardust Crusaders in 1973-1974, a research group from the Speedwagon Foundation is sent to Antigua, Guatemala under Lisa Lisa's orders to investigate the identity of a serial killer with an unknown power. Their investigation leads them to Fernando Alhorn, the leader of human smugglers who has been using the Arrow to awaken abilities in people.

The Lord of the Flies

In around November 1972, Lisa Lisa, now the head of the Paranormal Phenomena Section of the Speedwagon Foundation after being a special advisor for many years, dispatches a group of investigators to Antigua, Guatemala, to capture a serial killer with supernatural powers. After five months of investigation, the representative of the group, J.D. Hernández, sends a detailed report back to the Foundation's headquarters. All of the 27 victims were devout Christians who were shot in locked rooms with no evidence left behind. From the unusual circumstances surrounding the victims, J.D. theorizes that the serial killer has "invisible bullets", an ability that may be connected to the Ripple. They realize that the killer will most likely strike again during Semana Santa, Antigua's biggest parade of the year in April where the streets will be filled with holy iconography. J.D. enlists the help of two teenage locals, Octavio Luna Kan, and Joaquín Ruiz-Jorruda, to help him find the killer. Utilizing their network of informants on the streets, they successfully track down the serial killer, an indigenous man named Fabio Ubuh.

Octavio pins down Fabio in the plaza but the killer summons a massive swarm of flies, shooting Octavio in the shoulder and back. Lisa Lisa reveals herself, taking off her disguise as a homeless lady, and creates a massive electrified dome using the Ripple on leaves, flowers, and dyed sawdust from rugs. Dubbed "Thousand-Color Overdrive", the technique manages to stop all of the flies. Fabio attempts to summon another horde of flies from his throat but Lisa Lisa redirects them using her muffler. She grabs Fabio by the throat and fills his body with the Ripple, rendering him unconscious. She confirms that Fabio's ability is not the Ripple, but something else.

They eventually learn that Fabio has named his power "El Señor de las Moscas". Meanwhile, Octavio and Joaquín request Lisa Lisa to employ them as official members of the SPW Foundation. She denies at first, but gives them a challenge consisting of two tasks. After they pass the challenge using their multitude of skills, Lisa Lisa hires them. From both Fabio's testimony and the duo's investigation, a group of human traffickers seem to be connected with Fabio's newfound power.

A Game of Hopscotch

Accompanied by Lisa Lisa, Octavio, and Joaquín, the research group led by J. D. arrive at a small settlement where the human traffickers are rumored to be. A mysterious paranormal occurrence later recorded in the SPW Foundation's files as "Hopscotch" attacks them again, this time by a 15-year-old orphan named Izahela Mena-Mena, assisted by other children. After being placed under the protection of the SPW Foundation alongside the other children, Izahela reveals that a group of human traffickers led by an individual called Alhorn are indiscriminately shooting emigrants from Guatemala attempting to cross the border to Mexico with Arrows, exploiting the surviving victims for their new abilities.

In the briefing room for the research group later, Lisa Lisa recounts the magnitude 8.1 earthquake causing widespread crustal movement in the mountain ranges of Peru. Strangely the research body which attempted to conduct a geographical survey of this area were infected by an unidentified illness causing mostly death, but survivors exhibited unnatural bodily changes such as spontaneous combustion and electric discharge. Presumably, a pathogen which was hitherto confined underground was released. This virus derived from minerals may not be limited to just Peru; it may exist inside an earth-wide stratum. Moreover, the virus most likely encroaches the intrinsic soul and consciousness of humans to overwrite its very foundations. Lisa Lisa reveals she had been investigating this subject for many years, and alongside informed circles and researchers, have hypothesized that somebody who wished for the power of a perfect god had become aware of the existence of these minerals, and processed the ore into the shape of an arrow as a source of a transcendent virus metamorphizing human existence, awakening an ability of extraordinary power surpassing human understanding.

From the inherent nature of the Arrows, they have traversed the world and must have emerged even in battlefields and conflicts. Lisa Lisa states that it is now their duty to retrieve every Arrow in circulation under the SPW Foundation's administration. For the present, they will focus on capturing the subordinates of Alhorn and recover the Arrows they possess in Latin America.