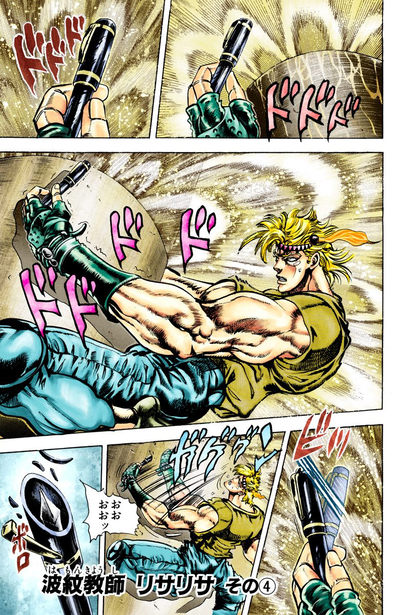 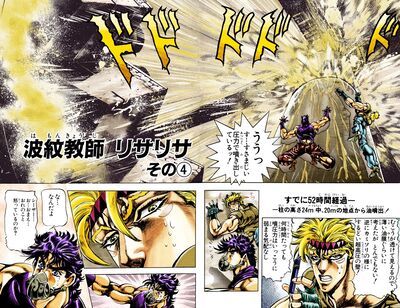 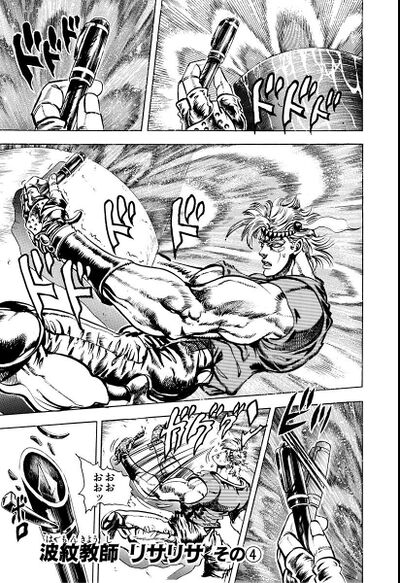 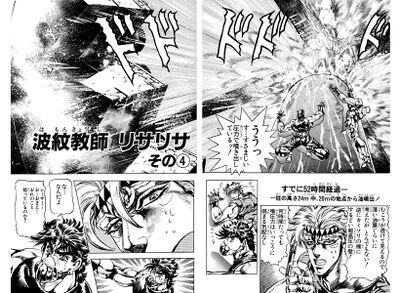 Caesar pulls out a pen and slowly inserts it into the oil barrier. The pen's cap is sliced clean in half, proving the high pressure of the oil flowing out of the pillar. 52 hours have passed and Caesar is forced to try and pierce through the jet head first. Caesar is able to send an attaching Ripple through his feet in order to keep them on the surface, while simultaneously emitting a repelling Ripple from the body parts touching the pressurized oil. By carefully controlling these two opposite Ripples, he is able to slide through the jet and onto the other side with just some loss of breath.

Nine hours later, Caesar reaches the top of the pillar, while Joseph is 20 meters below, still stuck under the oil jets. Caesar asks Lisa Lisa to stop the oil, realizing that with Joseph's personality and lack of training, he will likely try to jump through the barrier and get himself cut in half. Joseph decides to take the leap, but instead of going through the oil barrier, he moves with it, gliding across the surface using the Ripple. Ten seconds later, Joseph is clinging to the outer wall with one hand. Lisa Lisa appears and explains that by sliding on the oil to the outer edge, he was able to jump above it at the point where the pressure was least powerful.

Joseph, still clinging to the wall, begins to lose his breath, as he is not accustomed to his breathing mask. His Ripple is disrupted, causing him to fall, but Caesar grabs him in the nick of time. After 61 hours and 9 minutes, Joseph and Caesar both reach the top of the pillar and finish the first part of their training. 26 days remain until the Wedding Ring of Death melts.

Author's Note
“
The weather was nice, so I hung up the futon my assistants use. Come to think of it, it's been a year since I've done it.
”
—Hirohiko Araki
“
天気がいいので、フトンを干した。アシスタント用のだ。考えてみると、一年ぶりだった
”
—Hirohiko Araki