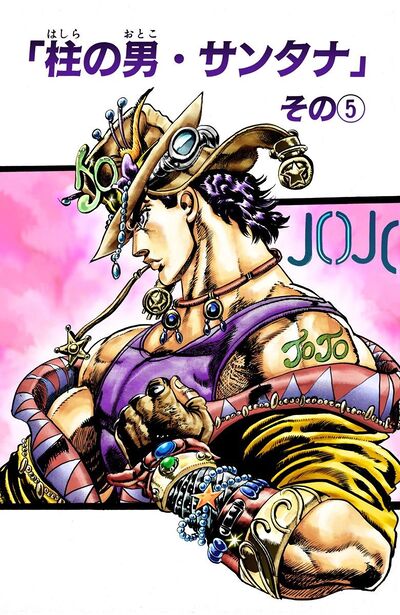 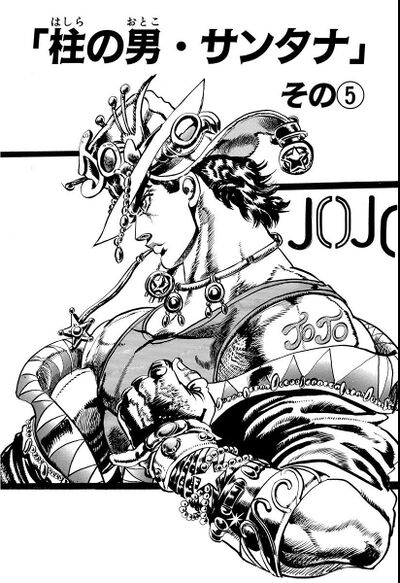 The Pillar Man, Santana, Part 5 (「柱の男・サンタナ」 その⑤, 'Hashira no Otoko Santana' Sono 5), originally Ripple into the Ultimate Being! (究極生物に波紋！, Kyūkyoku Seibutsu ni Hamon!) in the WSJ and tankobon releases, is the fourteenth chapter of Battle Tendency and the fifty-eighth chapter of the JoJo's Bizarre Adventure manga.

Joseph questions Santana about his species and repeats casual greetings to him. Baffled, Speedwagon asks Joseph why he is doing this and Joseph says he wants to determine if Santana is a good life form. Stroheim argues that he is evil because he killed his men, but Joseph writes this off as Stroheim provoking Santana to kill his men by awakening him from his slumber. Joseph adds that he only came to take Speedwagon back with him to New York, and there is no reason to provoke conflict with Santana if he isn't evil.

Joseph continues to talk to Santana, trying to get him to talk, but Santana ignores him and starts to walk past Joseph. Mildly angered by Santana's deadpan reaction, Joseph tries to trip Santana to get him to speak. However, Santana's leg goes through Joseph, to his shock. Santana then approaches a dead officer's machine gun and asks what it is, as he has never seen anything like it before, to no reply. He proceeds to dismantle the gun, showing that he is an amazingly fast learner with high intellect.

Knowing that Santana does speak their language, Joseph continues to seek his attention. Annoyed, Santana uses his Rib Blades attack in an attempt to eat Joseph, but instead of absorbing Joseph into him, Joseph is repelled back by his own Ripple energy. Confused by this, and by the fact that Joseph feels different than any other human he has encountered before, Santana tests to see if Speedwagon is like Joseph, and confirms that Joseph is truly one of a kind. An enraged Joseph picks a fight with Santana, trying to punch him with the Ripple, only to find that his current Ripple does not work on Santana.