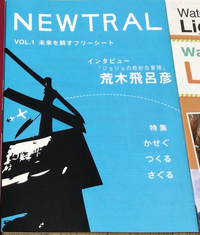 An interview with Hirohiko Araki published on the free NEWTRAL Vol. 1 newspaper and online on their website.

Araki: Oh, don't worry. I not here to make anyone nervous today, my goal is to be healing others: Really, please don't be nervous.

I: Well my first question is, what kind of 22 year old were you, and what was your life like after graduating from high school?

A: Um... Well, it was the 70's. The mangakas at that time were a generation after people like Tezuka-sensei, Akatsuka-sensei, and Fujiko-sensei. And it was a time when the genre of manga really diversified. Not only manga, but music too, like jazz crossing over to rock music. I spent my teen during a time when everything was fusing together, so I kind of caught the momentum of that, and then Yudetamago-sensei, who was the same age as me debuted when we were about 16 or 17. Then I realized that I can't be wasting time. Of course I studied too, but as a student, I also was really interested in art, like manga, music, film, and fine arts. I really aspired foreign countries as well.

I: How old were you when you became interested in such things?

A: Well, from around high school, or maybe even middle school... Then I dreamed of being a mangaka or have a job relating to that.

I: So, you actually read Yudetamago-sensei's works?

A: Read it, and, well, there were many mangakas, and I couldn't do anything about that, but I felt like I had to something myself.

I: Interesting, so that was your turning point in life?

A: Probably... It may overlap with some questions later but can I keep going on?

A: Well, how should I put it... You know how you learn from your elders? Back then was a time when doing the same thing as your elder was really looked down at. You had to do something different. If there were several paths that your elder paved, it was like finding somewhere in between that no one else has gone before. Kind of like that.

I: So it was about doing something different?

A: Well, you had to kind of make sure not to mimic anyone, yeah. It wasn't necessarily about going your own way, but learning from your elders and not stepping in their footsteps. You were looked down if you ever stepped in it. People would say “you're just doing the same thing, just coping!” or something, and look at you with scornful eyes.

I: What did people actually say towards your works?

A: Like, “This looks looks that,” or “thats story development is identical to so-and-so,”

I: At times like that, where did you get inspiration to paved your own way?

A: Um... so, I had influences from my favorite mangakas, but also came up with my own things, or added on to it. Draw an area that hasn't been explored by others... and like that, for example, I now think theres a theory, and following a “theory of hit” makes you feel like you have to do something that sells. I didn't think of that at all, so I guess I was pure in a sense, yeah.

I: Not a manga only for the sake of selling?

A: Its about drawing something that's never been drawn.

I: Interesting. This gets a little personal, but going to art school, I really understand what you mean. You take a class with a teacher and you get drawn towards your teachers style, but are punished if you fully adopt that style.

A: Yeah, its pretty much like that, but more intense with a strong 70's feel to it

Part 2: What it feels like after becoming a Mangaka

I: So, what was it like to actually become a mangaka?

A: Well, I was worried sick and couldn't sleep during earlier works, and even when starting JoJo. I wasn't sure if it was alright.

I: And did you have a strong support, someone backing you up?

A: Ahh, yeah. In my case, I based my works on works of art from the past that I felt sure, and things that were done by people I was sure about, so even if someone saids something bad or negative, I always was able to feel sure. And the told me that I had to be bold if I wanted a serialized series. Failing a serialized series is losing to yourself, so I think it works out well for an optimistic person.

I: Do you think most mangakas are optimists?

A: I think people who can keep doing it are like that. More like someone confident than an optimist. Many of them have absolute confidence in themselves. Many seems like they go beyond narcissism. So, you don't want to cripple their pride, you have to nurture it. They're probably simpletons. Out in the real world, you have to be careful not to be scolded for that.

I: Manga has really infiltrated our society nowadays, what does “manga” mean to you?

A: Like I said earlier, its about the beauty of the art and training your “eyes for judging beauty.” Its kind of like a training. Um... I'm drawing and sometimes fall into meditation, and skip time. Kind of like that.

I: How do you feel about other mangas and works?

A: Well, yeah, I like some of them, but I'd also like to recognize those I'm not sure whats fun or interesting about them. Maybe not recognizing them, but try to think while I read them. Not only in manga but also in films, the kind of story that I don't feel interesting is when the protagonist doesn't have a reason to progress. For example, there are some that are negative towards fighting, and I personally think thats a no-no. So, if theres going to be war, it should be like “Yeah! I love war!” Thats an extreme example, but fighting in war while denying war I'd say is negative story-wise. If the is a “zero,” the denial makes it a “negative.” But fighting for one's own satisfaction, or fighting war to save one's mother, that kind of elements that makes the story “positive” is really interesting. The kinds of film fit in that. And because they fit in, I analyze from there. So, if you like “negative,” and gather a lot of “negative,” you start compiling those kinds of movies, but there are many perspectives, so there's not really a right or wrong direction. Its up to your own preference.

I: So the kind of things you're not interested are things that are negative.

A: Yeah. I can't get psyched watching or writing things like that.

I: You have been doing manga for a long time. I've heard in other interviews that you never miss an due date, and we see you as always being on schedule. Do you ever have trouble coming up with new ideas?

A: Its not really about the lack of ideas, but the scariest thing is the lack of the will to draw. Lack of idea is really losing the will to create. If you're willing to write, you will get ideas, so you shouldn't be afraid of the lack of ideas. Just keep putting things out there, and save nothing. Feeling like you don't care is the worst thing.

A: Well, yeah, I start feeling like that when I get exhausted.

I: And how do you cope with that?

A: Um, in my case, I go discipline myself a little. Nothing serious, but go out on a walk to shrines, like that. I don't go out in waterfalls but that takes away my worries. It kind of weird, but going on a walk or a bicycle trip alone, discipline through a little exercise.

I: Not only use your mind, but also your body...

A: I exhaust myself, and theres many things. Like carrying a heavy load, and you start to realize what's really necessary. I start to think I don't need a cell phone because its heavy and I wanted to toss it, and I had no signal anyways... but I feel really healed by an iPod for some reason.

A: Somehow music is really good. So I really only need water, raincoat, and an iPod. I went to a place called Kumano Kodo once. It saids Kumano (Kuma = bear in Japanese) so I figured there will be bears in this place, so someone told me to take my cell phone. I took it, but didn't get any service... Then my feet starts to hurt, and I really started getting sick of all my luggage. I brought some bread with me but I ate it. And I started to realize that those things are not necessary. You don't need it to survive.

A: Empty, and then I come back from that and start working again.

I: Your art works has been featured in fashion, a science magazine cover, and now in the Louvre. What is the meaning of working on projects besides manga?

A: Um, its the drawing... if theres story and drawing, I guess I'm better at drawing . I don't know, I'm a mangaka, so I have to draw, or otherwise people won't think me as an mangaka. There are mangakas famous for their story, but I'm more on the drawing side, so I want to draw the ultimate picture, something really good.

I: Do you not have enough time at the moment to do that?

I: Was there anything else you were asked to do?

A: Something weird? Is there any thing weird? Maybe the CD cover? The t-shirt designs? I guess the Cell project was the weirdest, but that doctor's medical theory and my philosophy of stands were the same, so he asked me to draw. That way of thinking makes me happy, happy because its kind of like DaVinci. That really is a theory that no one can understand, borderline crazy. No one who sees those sentences agrees to the theory. It might be wrong. And if you write something wrong, someone is going t object later. So that project was a little risky.

I: What do you wish to do next, do you have any requests?

A: Umm... yeah, I probably want to do a series of pictures.

A: Um, something like the "The Dancing Girl of Izu"

I: So, did you choose that?

A: Yeah, but only from the Shyeisha-Bunko series.

I: Why the "The Dancing Girl of Izu."

A: I kind of wanted to draw the emptiness of youth.

A: I think people's actions should be based on their “eyes to judge beauty.” How to judge what's beautiful. Are your own actions beautiful, or not. And by beautiful, I don't simply mean the appearance of something, but does something fit in, can you understand it. I think studying is for training your “eyes to judge beauty.” For example, whether its physics, sociology, or literature, its a way to find out how the pieces fit together nicely, and the study of medicine is the way to discover a theory to cure beautifully. And as you layer those theories together, you are able to judge things, and if you know how judge you will be able to make a decision. I want young people to train their “eyes” so they can judge things, theories, and themselves, and I don't want them to study only as a way to become rich or for a high academic record. I think having such evil or not is important. It may sound fancy, but being something like a hero for the good is really important.