A summary of Muhammad Avdol's history and movesets in video games.

Avdol appears as a support character for the JoJo's Bizarre Adventure arc story, where the player can talk to him in order to obtain minor information.

Avdol appears in the game as a special attack in Jotaro's 4-block battle koma, as he appears in front of Jotaro performing his "Crossfire Hurricane Special" attack utilizing Magician's Red.

Avdol appears again in the sequel as a special attack in Jotaro's 4-block battle koma, performing his "Crossfire Hurricane Special" attack utilizing Magician's Red, but can now cause a "burn effect", setting the enemy aflame and making them take damage over time. Avdol also appears during the JoJo's Bizarre Adventure World intro sequence.

Avdol appears as a playable character in game. He first shows up at Jotaro's house and joins his party after the events at Jotaro's school. Unlike in the manga, Avdol can survive his final confrontation with Vanilla Ice.

Heritage for the Future (Arcade/PS1/Dreamcast)

Avdol is one of several playable characters in the game. In terms of movelist, he is the closest the game has to a "Shotoclone" in that he possesses a fireball (Crossfire Hurricane), a Shoryuken-type move and a movement based quarter-circle-backward input move. Most of his attacks also consist of using the fire-themed attacks he used during the entire Part 3 saga.

In his arcade story, Avdol manages to avoid his canon death at Vanilla Ice's hands, just barely ducking under Ice's Stand. Avdol's ending is notable in that, similar to Chun-Li's ending in Super Street Fighter II (since the game was made by Capcom), it can end in one of two different ways. After destroying DIO, Avdol returns to his shop in Khan Khallili and decides to read his own fortune first. The player is presented with two face-down tarot cards, one being The World and the other being The Magician. If the player manages to pick The Magician, Avdol, pleased, decides to reopen his shop. If the player got The World, however, DIO greets Avdol once more, hinting at an unexpected resurrection.

If Avdol starts a "Blazing Fist Match" against another character, he will make Magician's Red keep shooting a sequence of Crossfire Hurricane as his "ora ora" attack style. 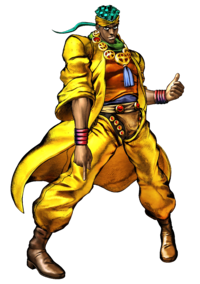 Avdol is one of the 9 characters representing Part 3 in the game, and was confirmed along with Hol Horse and DIO.

Most of his attacks are similar to those from the Capcom game (Heritage for the Future). As one of the mass majority of playable characters in the game with the "Stand" Style, Avdol can turn Magician's Red on/off, changing movesets, as well as having access to the Stand Rush ability returning from the Capcom game, being able to attack in conjunction with his Stand. Avdol has 1000 HP.

Avdol possesses one alternate costume, inspired by his first appearance in the manga (where his appearance uses more scarfs and ribbons). In previous games, Magician's Red was primarily colored with one color (red), while in All Star Battle, it also possesses two main colors itself (blue-black from the waist down on its wristbands, and red from the waist up).

During a fight, Avdol can use several different attacks that were featured in Stardust Crusaders.

ON GROUND
Avdol can summon or call off Magician's Red, changing the attacks he has.
Throw
Red Bind!
2 ATK buttons at close range or

ON GROUND
Magician's Red ties its opponent with rope-like flame, before breathing fire onto their face and exploding their shackling.
Special Moves (Stand Off)
Crossfire Hurricane

(hold to delay explosion) ON GROUND
Avdol summons Magician's Red to cast a fire ankh into the ground, hitting the opponent if they're in its path. A small flame will appear on the floor until the attack button is released, then a massive fire ankh explodes from the ground, heavily damaging the opponent and knocking them into the air. This move is a low attack, and cannot be blocked if the opponent is not crouching. (Comboable)
Must I do this the hard way?

ON GROUND
A Throw. Avdol summons Magician's Red to use Red Bind, stunning the opponent and leaving them vulnerable. (Comboable)
Special Moves (Stand On)
I'll burn you to cinders!

ON GROUND
Magician's Red bursts flame from its body, knocking the opponent into the air on hit. This move doubles as an anti-air. (Comboable through Puttsun Cancel)
Flaming Detector

ON GROUND
Magician's Red casts a Life Detector that slowly homes in on the opponent. A Stand Rush skill that Avdol can disconnect from to attack the opponent while it is executing. (Comboable)
HELL 2U!

ON GROUND
Magician's Red attacks directly, its strikes enhanced with fire. Depending on the attack button inputted, up to three hits may be utilized in the combo. If Heavy is inputted, the third and final hit will send opponent flying. A Stand Rush skill that Avdol can disconnect from to attack the opponent while it is executing. (Comboable through Puttsun Cancel)
Now's my chance!

ON GROUND
Magician's Red charges its fist. After a short delay, it punches downward in a powerful single strike. This move can only be stopped by Throws and HHA/GHA; Any other form of melee strike will immediately be met with the premature unleashing of the attack. A Stand Rush skill that Avdol can disconnect from to attack the opponent while it is executing. (Comboable through Puttsun Cancel)
Heart Heat Attack / Great Heat Attack
Gimmie four wishes instead!

+ 2 ATK Buttons ON GROUND
Avdol's HHA, "Gimmie four wishes instead!", has Magician's Red fly forward and kick as he notes of its unforgiving behavior. Should the opponent be hit, Magician's Red will appear behind them and use Red Bind to stun them, before stomping them into the ground. The Stand will then pick them up by the neck, and Avdol will face away from the scene and exclaim "YES I AM!" as Magician's Red explodes the opponent in its hand.
Crossfire Hurricane Special

ON GROUND
Avdol's GHA, "Crossfire Hurricane Special", has him summon a ring of flame-ankhs that expand outward. If they strike, the opponent will be relentlessly pelted by them and slowly lifted into the air. Magician's Red will charge up and increase the intensity of the attack, before finally blowing the opponent up with a gargantuan Crossfire Hurricane Variation erupting from the ground (much like how Avdol defeated Polnareff the first time they met).

Avdol was confirmed for the game alongside Mariah.

As a Stand User, Avdol is one of many characters with wildly varied abilities that grant him uniqueness in battle.

Unlike the previous game, his main color scheme is now based on his anime incarnation.

In the altered timeline he, Kakyoin, and Iggy manage to survive the final battle against DIO, but are hospitalized, still sustaining heavy injuries. They are watched over by Polnareff, and all are invited to France to go along with him.

If paired against Esidisi the two will note their similar abilities and they wonder whose fire powers are superior.

He is paired with Iggy in the Eyes of Heaven Tournament but was eliminated in the preliminaries by Jolyne Cujoh and Gyro Zeppeli.

Avdol appears in Diamond Records as a playable character in both the Action Battle and Tactical Battle game modes. He has a variety of unlockable statues between the 'Tactical', 'Fighting Spirit', 'Unity', and 'Courage' types, ranging from 3 stars to 6 stars. Avdol's moveset in both game modes is comprised of various attacks inspired by the anime, using his stand Magician's Red.
Moveset

Avdol's basic attack string is a combination of up to five various attacks from Magician's Red, including basic strikes and a single burst of fire. In Tactical Battle, this is cut down to only three hits.

Magician's Red does a strong roundhouse kick against the opponents around him. Opponents who are hit by this will burn temporarily, taking constant damage while the effect lasts. In Tactical Battle, this hits all opponents present on the stage.

Avdol uses Magician's Red to let out a barrage of flames on an opponent, which is then followed up by Avdol performing his iconic "YES I AM!" line. (Unlockable)

Cost: 0
After using Skill 4 times, replaces all panels with Intensified panels (up to 2 times per battle).

Cost: 0
After clearing 80 panels, replaces a random panel with a partner Box panel.