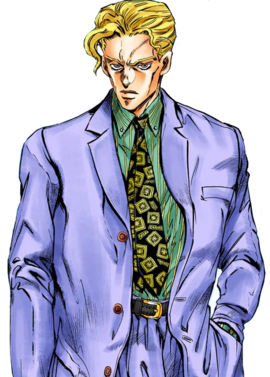 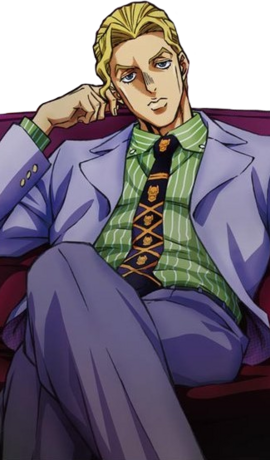 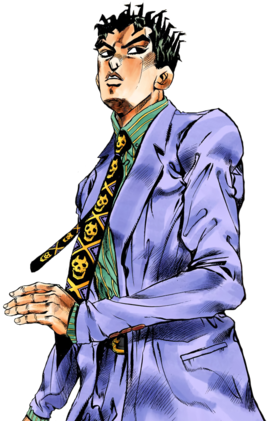 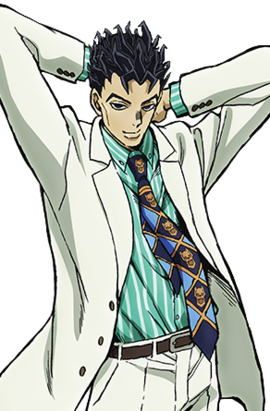 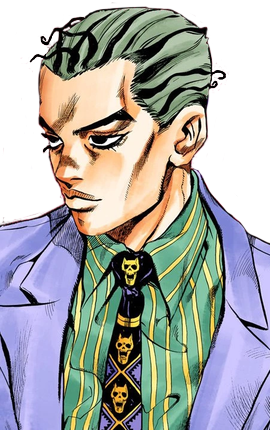 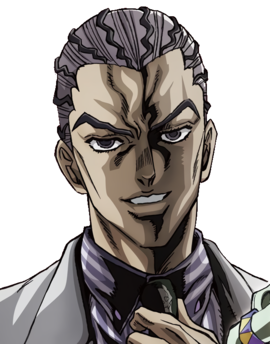 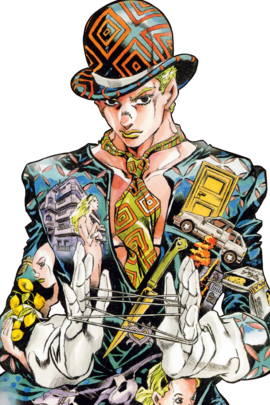 [7] suit and a dark tie patterned by a column of skull emblems with upright, cat-like ears, similar to those on his Stand, Killer Queen. As a salesman by profession, he wears a similar suit throughout the series, though he usually takes off his jacket at home.

Kira longs for a peaceful and quiet life, safe from any worry, and does not wish for it to be interrupted. Whenever that life seems assured, Kira adopts a jolly and confident demeanor.[8][9] Although he is highly intelligent and possesses many talents, this yearning shows in his dislike of coming in first, and Jotaro theorizes from his many trophies that he even made it a point to never rank better than 3rd in any competition so as not to stand out.[10] Since his youth, Kira has been avoiding standing out, living a healthy life and following a strict regimen.[11] He becomes bothered when someone disrupts his habits and goes to extreme lengths to get them back. As his father pointed out, this will to stay in the background was so bad that if bullied or denied his favorite toy, Kira would bite his nails until they bled, being the only way he's found to express his frustration.[12]

However, beneath his façade of a simple, humble salaryman, Kira is very abnormal. The most abnormal characteristic of Kira is his frequent and periodic murderous impulses. Kira targets women, or, more specifically, women with beautiful hands. Kira possesses a hand fetish, which he discovered when he found himself aroused by the Mona Lisa's hands.[13] However, his desire has never extended to the rest of the female person and he otherwise shuns their presence.[8] This results in murdering random women, not caring in the least how they look or behave, in order to acquire their (severed) hands as "girlfriends," acting as if the severed hands were actually sentient and conversing with them, even offering them various gifts.[14] When one "girlfriend" begins to decay, he disposes of it and goes off in search of a replacement.[8] Kira is an opportunistic killer, his modus operandi being spotting a potential victim, following her to her house, and murdering her when both are isolated.[15][16] Due to his Stand leaving absolutely no trace of their victim behind, these murders are actually reported as missing persons. Moreover, Kira has expressed various other similarly violent impulses such as the desire to choke his victims to death[17] and has horribly scarred at least Reimi Sugimoto.[18]

Apart from his murders, Kira is particularly violent when someone threatens his way of life or publicly humiliates him. Since Kira doesn't want to be noticed, he will try everything to solve his problems without facing anyone directly. However, if he doesn't have any other choice, he will instantly try to kill whoever discovers his true nature.[11] Kira is quick to drop his polite demeanor, rudely insulting his foes or violently beating them before killing them. After Koichi's Echoes ACT 3 results in Kira making a fool of himself in public and attracting unwanted attention, Kira went on his way to torture and humiliate Koichi, putting his shoe into his mouth and slamming his face against the ground.[19] Kira has a hard time controlling these violent impulses, as seen when Hayato Kawajiri threatened to blackmail him. Kira lost his calm attitude and murdered Hayato in an enormous lapse in judgement.[12]

Kira is also afflicted with a number of other quirks. Apart from his wish for a monotonous and tranquil life, Kira's OCD also makes him very meticulous and thorough. Kira has sophisticated tastes, notably buying his lunch at the best store in town[8] as well as wearing Valentino suits.[20] He doesn't tolerate any imperfection and is even willing to waste time fixing Koichi's socks instead of fleeing the scene, as he could not stand seeing them being worn inside-out.[19] Furthermore, during his time as Kosaku Kawajiri, Kira made sure to perfectly mimic his new identity in every way, notably Kosaku's hand-writing,[17] which he trained himself to do conscientiously. Kira's solitary nature is partially stemmed from his disgust of people who don't behave as properly as he does. Kira's favorite fashion brand is Gianfranco Ferré

Kira is also an egocentric and selfish man, akin to a spoiled child. He doesn't care that his crimes involve murder and make his victim's relatives suffer. He only seeks to satisfy his basic instincts. In addition, Kira is determined to preserve his lifestyle, and being set back only increases his determination. Kira is also quick to shift the blame to someone else for his troubles, notably the Joestar group, for ruining his life.[17] Kira possesses a twisted pride in having managed to mix his tranquil lifestyle and his serial murders for so long, and categorically refused to flee the town and live in fear, preferring to maintain a shaky façade of normal life with the Kawajiri's.[12]

In addition, while normally a very cautious, meticulous man who ensures he leaves no evidence behind, there are a few occasions where he became overconfident and let his guard down, and each time has led him to a confrontation with the Joestar group or defeat at their hands. He once put his "girlfriend hand" in a sandwich bag and failed to notice Shigechi's presence as he came to take the sandwich bag, thinking it was his,[8] which eventually lead to him being found out. In addition, he left his jacket to a tailor at Centipede shoes and left his real name, forcing him to confront them.[21] He was overconfident in his Sheer Heart Attack, believing it was invincible and left the scene[22] but was forced to return to the scene of his crime when Koichi managed to subdue Sheer Heart Attack. In addition, he let his guard down near a wounded Jotaro, allowing Jotaro the opportunity to beat him. Finally, when he was overconfident he had beaten Hayato Kawajiri in his attempt to stop him, he blurted out his real name in front of Josuke by mistake, which Hayato had planned.[23]

Kira believes that he has luck and fate on his side, exposing a superstitious façade, claiming that whenever faced with an obstacle he will be able to make it through with a combination of hard work and opportunity. He measures and collects his own fingernail clippings, using them to predict his murdering luck off of their length.[10]

When Kira was pierced with the Arrow, his demeanor became much more relaxed and prone to elation due to his new-found power, which guaranteed that anyone approaching Hayato would be killed. Ecstatic to possess a power which would dispose of anyone who investigated him, Kira allowed himself one loud boast, which caused his downfall as Josuke overheard him claiming to be "Yoshikage Kira".[23]

During his confrontation with the Stand Stray Cat, Kira expressed a desire to protect his "wife," Shinobu Kawajiri, and even showed relief at her safety. A feeling that confused him, Kira rationalized it as merely his not wanting to arouse suspicion. Whether these feelings were genuine or not is left unanswered.[24]

As a ghost, Kira lost all memory of his previous life and has thus lost his temptation to kill. However, his desire for a peaceful existence and his latent brutality remained.[25] 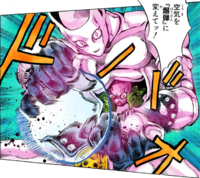 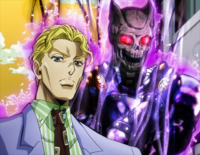