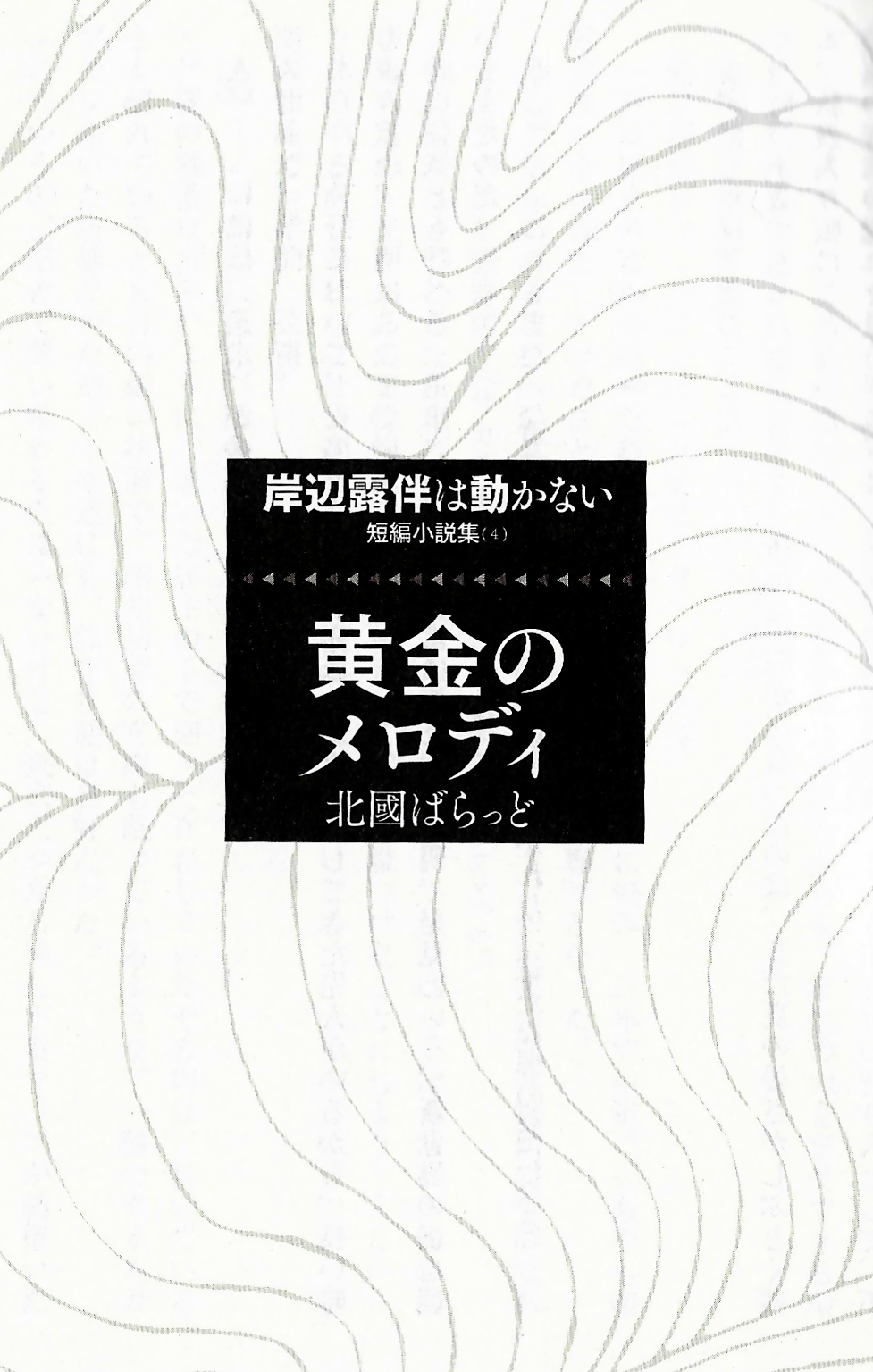 Rohan Kishibe Does Not Fall

Golden Melody (黄金のメロディ, Ougon no Merodi) is a short story that is part of an anthology of short stories based on the Thus Spoke Kishibe Rohan series. It was written by Ballad Kitaguni and published by Shueisha. Golden Melody was included with the November 2021 issue of Ultra Jump in commemoration of the second season of the TV drama.

It was then compiled in a collection named Rohan Kishibe Does Not Fall with two other stories, which is set for release on December 19, 2022.

One man's meeting with Rohan leads to the destruction of a village, and a loss of humanity.

Twenty-year-old Rohan Kishibe meets an audiophile named Kyomei Isaka (伊坂 恭明 Isaka Kyomei), owner of the audio appliance store Sakamochi Record in Sakamochi Town of T Prefecture. When Rohan first met him, Kyomei was a lazy teenager who was not at all business savvy and took pleasure in showing his superiority towards people over his audio equipment. Rohan immediately saw his attitude and reprimanded him for how lazy and arrogant he was and told him that if he is going to "pursue" one medium to devote his life to, he should put his all into it.

Inspired by Rohan's words, Kyomei's life suddenly turns around. He spends the rest of the day helping Rohan out finding the equipment that suits his needs and they parted ways from each other.

Seven years later Kyoka Izumi hands Rohan a postcard addressed to him from Kyomei, inviting him to meet at Sakamochi Record at exactly four PM next week. Having done some research on the town beforehand, Kyoka tells Rohan that its population has been rapidly declining for years, seemingly starting around the time that Rohan had visited Kyomei.

When the two of them arrive, they are surprised to see that there are no signs of life whatsoever in this town. Even though they were well aware by now that the population had decreased over the last seven years, it seems as if all the life here was evacuated rather quickly.

Eventually they come closer to the Sakamochi Record store and hear a strange sound and are then approached by a monster that looks to be made up of audio equipment. It has a speaker for a head and looks like machine parts integrated into a human body.

The monster grabbed Kyoka, who began to scream, but instead of wailing like you might think a human would, she began emitting this wonderful music and began dancing. The creature turns to Rohan and greets him as though he is an old friend, and Rohan immediately knows who it truly is: Kyomei Isaka. Kyomei tells Rohan to make his "luggage" cease the noise, or else he will kill her.

Rohan uses Heaven's Door to silence Kyoka for three hours, which gets her released from Kyomei's clutches.

Rohan joins Kyomei in walking throughout the rest of the town and is surprised to discover that his monster friend's footsteps make absolutely no sound as he treads the ground. Kyomei reveals to Rohan that ever since that fateful day they met seven years ago, he has been trying to pursue the purest audio humanly possible. He devoted his life to discarding all things that generated unnecessary sound, which happened to include all the people in the town he resides in. He has been slowly reborn since that day, until he fully assimilated into audio technology to be as close to "pure audio" as possible and eliminate all noise.

Rohan had many questions for Kyomei, including what he did with the people of this town, how he got the money for all of this equipment, and how easily this man spiraled into insanity. The answer from Kyomei always boiled down to his complete desire to pursue pure audio. Rohan finally asked a question that got him a new answer: what happened?

His answer was "sound." He asks Rohan if he knows what the Golden Ratio is and proceeds to explain that it is the law of infinite energy. While there is a Golden Ratio in nature, there is also a Golden Ratio within sound known as the "833 cents scale." If you were to produce a song that perfectly followed that interval, then that song would be a "Golden Melody."

The two of them finally enter the store, and Rohan is in awe of all of the measures taken to reduce sound. All the buildings surrounding Sakamochi Records are painted black, and in Kyomei's audio room there is a record player firmly attached to the ground, so as to reduce any recoil while playing music. Kyomei goes on to say that it is almost impossible to perform this Golden Melody, as noise will always somehow penetrate this room, but his goal is to finally be able to do it and listen to the sound of infinite energy.

Rohan wonders what the source of this madness could possibly be and realizes that there is a single record in a box propped up on Kyomei's back... Written on it are the words "黄金のメロディ," or "Golden Melody." This is the record that contains the 833 cents scale, and the Ripple of infinite life energy is packaged inside here. This is the sound that was coming out of Kyoka earlier, and Rohan worries about how dangerous it would be if the music is able to be played at the greatest sound quality possible.

While they talk, the sun begins to be clipped by the moon outside, as a solar eclipse begins to occur. Kyomei reveals that this is a phenomenon that only happened 25 years ago, where certain conditions are met, and this unique solar eclipse makes a "hole" through space, connecting the earth and outer space, eliminating all sound for a certain period of time. Kyomei will use this time to play the Golden Melody and fully harness its infinite energy.

Rohan warns him that he will attack him if he tries to play that sound, but instead of connecting the record to a speaker, they are instead attached to headphones. Rohan is confused, as he assumed that Kyomei wanted to play the record for the whole world to hear, but it's revealed that Kyomei believes only he should be able to listen to it, since he is the one that discovered it. He only brought Rohan along because he felt that it was his fault for bringing him to this. Rohan resents this sentiment, and he tells Kyomei that his actions are his own fault, and they have nothing to do with him.

Kyomei plays the music and listens to it for exactly 3 minutes and 20 seconds. When the song ended just as the sky began to brighten again, Kyomei was gone. Showered in a melody too pure, his soul melted into the music and disappeared, unable to withstand the sound waves radiating pure infinite energy.

As Kyomei's life energy faded, Rohan read what was left of his memories using his Stand. From what he could read, a band called The Golden Melodies created the record that Kyomei played after meeting similar conditions 25 years ago during the last eclipse. Kyomei was inspired by them and made it his life's goal to listen to this pure sound.

Rohan meets back up with Izumi and begins to notice life returning to the town now that Kyomei was gone.

After the madness had all subsided, Rohan pondered the events he witnessed with Izumi while she discussed his latest one-shot manga. Izumi suggests that Rohan writes a story about a hidden villa in the mountains (leading into the events of Millionaire Village,) to which Rohan is surprised by.

As they continue their meeting, Rohan thinks about Kyomei's "pursuit" of pure audio and realizes himself that his passionate pursuit of drawing and writing manga will not end for quite a long time.