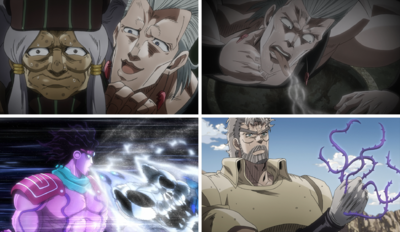 Justice, Part 2 ( その2, Jasutisu Sono 2)[1] is the fifteenth episode of Stardust Crusaders and the forty-first episode of the JoJo's Bizarre Adventure anime. It covers Chapter 157 through the first half of Chapter 160 of the manga.

After luring the heroes to her hotel, Enya the Hag singles out Polnareff and reveals her ability. Justice can turn anyone into a puppet if they are wounded and the Frenchman must hide from Enya's zombie horde.

Enya rushes to hide Hol Horse's body from Polnareff to avoid alerting the others, struggling to suppress her rage when Polnareff shows his appreciation of her "hospitality". However, Hol Horse, who is still alive, alerts Polnareff to an attack from Enya, who uses Justice's fog to control the dead civilians of the village like zombies. Retreating to a bathroom to hide from the zombies, Polnareff is hit by a surprise attack from the bathroom door's keyhole, allowing Justice to take control of his tongue.

Star Platinum sucks the air around Justice to suffocate Enya

While making Polnareff lick the toilet in humiliation, Enya is approached by Jotaro, who has suspected something was amiss with her and sees through her ploy when she refers to him by his real name, as the group had all used fake names when signing the hotel ledger earlier. Enya manages to inflict a wound on Jotaro's leg, but Jotaro manages to overcome Justice's fog-like form by having Star Platinum inhale it, suffocating Enya until she passes out. With the village revealed to have been a cemetery the entire time, Jotaro suggests to the group that they take Enya with them to learn more about DIO, while Hol Horse makes off with their car, advising the group to kill Enya while they still can.

Commentary
“
This episode makes a pair with Episode 14, and Hirofumi Ogura is at the storyboard for both of them. He's accustomed to comedy and this second part is precisely full of comedic elements.

Unconsciously, Polnareff manages to stir Enya's hatred more than ever. He's excellent at this little game. Even if the hag knows that it's not provocation, he's constantly rubbing it in her face by mentioning her son.

I like the zombie horde, they are as creepy as can be, but the real great moment you can't miss is of course Polnareff licking the toilet. This scene had our full attention and necessitated a lot of planning. Some wanted to add a little poo inside the toilet bowl, or debate about the overall level of dirtiness (laughs).

But in the end, Jotaro intervenes and takes the situation in hand. And what an entrance. As expected of him, he only has to enter the scene for the tension to rise. It's almost as if he was annoyed by the Polnareff gags and had decided to get to business. Incidentally, Jotaro was technically the only one able to defeat her, wasn't he?

I loved seeing Joseph making fun of Polnareff like he did in the end of the episode. A real complicity had appeared inside the group and it shows. This is the kind of teasing that we only find within a genuine comradeship.
”
—Naokatsu Tsuda, Blu-Ray limited edition commentaries