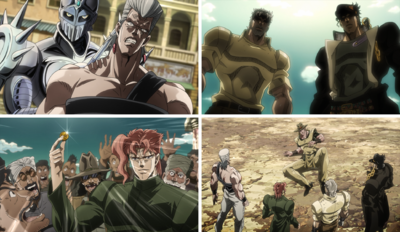 Emperor and Hanged Man, Part 2 (と その2, Enperā to Hangudo Man Sono 2)[1] is the eleventh episode of Stardust Crusaders and the thirty-seventh episode of the JoJo's Bizarre Adventure anime. It covers Chapter 143 through Chapter 146 of the manga.

Commentary
“
This is the final clash against Hanged Man. J. Geil is such a scumbag that it becomes genius at this point. The contrast is even better when we see that the User is really a weakling physically speaking. Let us salute Kakyoin's cunning plan and his unshakable calm in all situations.