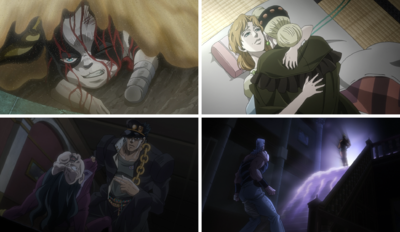 The fight against Vanilla Ice continues. Iggy has died to save Polnareff and it is now Polnareff's responsibility to defeat Vanilla Ice for good. Meanwhile, Holy receives the visit of Suzi Q.

Jotaro, Joseph and Kakyoin have barely reached the leisure room where they see the aftermath of Vanilla Ice's battle against Polnareff. They nonetheless advance further to confront the enemy.

Meanwhile, Vanilla Ice has seemingly killed Polnareff in the art gallery and comes out of Cream. Vanilla Ice then solemnly declares that it was ultimately Avdol who, by keeping the others alive, was responsible for his grievous wounds. Vanilla Ice swears to kill the rest of the heroes too but then notices falling grains of sand. In truth, Iggy has spent the last of his strength to lift Polnareff with The Fool, allowing Polnareff to ambush Vanilla Ice. Weeping for Iggy, Polnareff gathers the strength to attack Vanilla Ice, stabbing him in the forehead with Silver Chariot before breaking his neck.

Avdol and Iggy's ghosts gesture Polnareff to carry on without them

Polnareff reminisces Iggy and mourns his companion, while Vanilla Ice silently stands back up. However, Polnareff has already guessed that Vanilla Ice was turned into a Vampire. Thwarting an attack from behind, Silver Chariot destroys a door, letting the sunlight come in and destroy Vanilla Ice's arm. Vanilla Ice realizes too late his newfound weakness and is pushed into the light by Silver Chariot, which turns him into dust. The ghosts of Avdol and Iggy briefly appear, silently telling him to carry on. Despite not having time to mourn and must continue his search for DIO, Polnareff cannot refrain himself from crying.

Suzi Q pays a visit to her daughter

Meanwhile, Suzi Q has arrived in Tokyo to pay a visit to Holy, although she is still unaware of Holy's condition. On her way, Suzi takes as many pictures of the local landscape as possible. When she inadvertently antagonizes a Yakuza member, Suzi Q is saved by her butler Roses, who himself worries to death about Holy and tries to tell her the truth. However, Suzi reveals that she's been aware that Holy is ill and Joseph's absence is due to his efforts at saving her. Despite her grief, Suzi comes to her side with a reassuring look, as both women trust Joseph and Jotaro to solve whatever problem has arisen.

Back at DIO's Mansion, a Vampire named Nukesaku gloats. Having been victimized because of his weakness by DIO's other servants, Nukesaku is delighted to be actually the last survivor. He tries to trick Jotaro, Joseph, and Kakyoin by disguising himself as a woman, but his reverted hands allow them to effortlessly see through his trick. Jotaro thus uses him as a dummy to test how much Star Platinum can damage them, and then forces him to be the group's guide. Meanwhile, Polnareff is patching up his injuries on the stairs leading to the tower. He then suddenly notices a presence and sees a shadowy figure standing on top of the stairs. Light hitting half of his face, the "Revealed" DIO greets Polnareff from the stairs as Polnareff acknowledges him back.

“
This episode is where Vanilla Ice is taken out once and for all. In the end, Iggy decided to protect Polnareff at the cost of his own life. And even if his death is a sad one, one can still feel some satisfaction at seeing this duo triumph over such a fearsome opponent. They've done quite a feat.

For Vanilla Ice's decomposition under the sun's rays, we had used what we call the "magma effect". It was originally used in the first two parts for wounds caused by the Ripple, including amputations. We put a texture similar to magma instead of blackening out the injury. I find it is better for immersion and atmosphere. I gave this idea to preserve the mood. (laughs) We hesitated a bit on how to make Polnareff cry, but ultimately opted for a simple drop falling on his hand, rather than a shot of the tears on his face. I hope the subtleness is to your taste and that the scene will be as touching to you as it was to us.