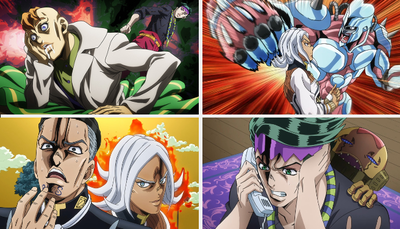 July 15th (Thursday), Part 3 (7月15日(木) その3, Shigatsu Jū-go-nichi (Moku) Sono 3)[1] is the thirty-third episode of Diamond is Unbreakable and the one hundred seventh episode of the JoJo's Bizarre Adventure anime. It covers Chapter 406 through Chapter 409, Chapter 413, and Chapter 414.

The battle against Terunosuke Miyamoto. Josuke is quickly sealed in paper by Miyamoto's power Enigma and it is now Yuya Fungami's turn to fight the enemy and free his allies from the paper.

Having found a folded-up piece of paper dropped by the enemy Stand user Terunosuke Miyamoto, Josuke opens it and is promptly greeted by Terunosuke and his gun. Josuke is able to protect himself with Crazy Diamond, but still doesn't bite his lower lip, the fearful tic needed for Enigma to imprison him. Terunosuke takes the time to show how Enigma can seal anything in a slip of paper as a storage method, but because Enigma is a weak Stand, it cannot damage or kill anything/anyone unless the paper trapping it/them is torn. He then throws a slip of paper with Koichi's name on it in the path of an oncoming car, which Josuke attempts to catch. In the process, Josuke finally bites his lip and is captured by Enigma. Before being imprisoned, however, Josuke angrily states that he knew the paper really didn't have Koichi in it because it would devalue the latter's status as a hostage. Josuke then vows to kill Terunosuke before Enigma finishes sealing him up. Victorious, Terunosuke points out Yuya's tic of placing his hand on his chin when afraid, before releasing a taxi to drive off to the Morioh Grand Hotel and capture Jotaro.

Yuya pursues Terunosuke with Highway Star, grabbing onto the taxi until it suddenly stops. Yuya is able to sniff out and avoid several traps placed by Enigma's paper, but is unable to stop Josuke and Koichi from being pulled into an indestructible paper shredder. Hopeless, Yuya touches his chin in fear, and is taken prisoner by Enigma. However when all hope for Josuke and Koichi seems to have faded, Yuya reveals that this was his intention, and takes advantage of his flattened state by successfully freeing Josuke and Koichi. The two then incapacitate and confront a terrified Terunosuke while Yuya takes the time to free himself. In an ironic twist, Josuke takes the time to point out Terunosuke's tic of closing one eye when scared and closing both eyes when extremely scared, before using Crazy Diamond and the refuse from the paper shredder to turn him into a book. Relieved, Josuke heads off to the library to deposit the book, titled Enigma; the strange nature of the book makes it another attraction among Morioh's residents.

The Stand Cheap Trick attaches itself to Rohan's back

Meanwhile, Rohan continues his meeting with Masazo, a meeting which turns sour when Masazo is trapped in such a way that his back is exposed to Rohan. Rohan fails to notice anything out of the ordinary in regards to Masazo's back, but the architect, who harbors a fear of people looking at it, quickly falls into despair. When Rohan tries to reassure Masazo, his renegade Stand Cheap Trick kills him and latches onto Rohan as a replacement host. Rohan repeatedly tries to flee from Cheap Trick, only for the Stand to persistently hold onto him, urging him to burn up his photo album. Rohan, realizing that this Stand is in league with Yoshihiro, deduces that at least one of the photos in the album could potentially disguise the incognito Kira, and attempts to use Heaven's Door to figure out how to defeat Cheap Trick before it's too late. However, Rohan is forced to abandon this plan: because he has become Cheap Trick's user, he cannot attack the Stand without harming himself. His only option is to show someone else his back, which would give Cheap Trick a new host. Knowing how this technique ended up killing Masazo, Rohan seeks to find a way to inform Koichi about Cheap Trick.

“
In this episode, Josuke confronts one of the few enemies he cannot defeat with brute force alone, Enigma. We also get to see how Fungami fights in this desperate situation, notably how he saves Josuke and Koichi from the shredder. Speaking of which, we slightly changed the way it was represented compared to the manga. Thanks to one of Soejima’s ideas, Fungami uses his Stand to extract the paper from the shredder and, as a result, we have a better understanding of how they were saved.

Meanwhile, the fight between Cheap Trick and Rohan is underway. Truth be told, this section was significantly reduced compared to the manga. We needed to quickly move onto Bites the Dust, so several scenes had to be cut, such as the one where Rohan is asleep and a bunch of delivery people show up.

In the manga, the title, “July 15th (Thursday)” doesn’t exist. We came up with it during a meeting. We were looking on the calendar for the last day before summer vacation and this was it.
”
—Naokatsu Tsuda, Blu-Ray limited edition commentaries