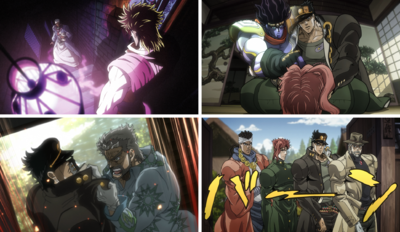 According to Joseph, the flesh bud attached to Kakyoin's brain allowed DIO to force allegiance from him through charisma. Avdol recalls having almost falling victim to one back in Egypt where he met DIO, though was fortunate enough to escape. Despite the odds, Jotaro takes it upon himself to surgically remove the bud from Kakyoin's head, claiming that Star Platinum's sharp precision would give him an advantage. Jotaro successfully removes the bud after some effort, and Joseph finishes it off with his Ripple. 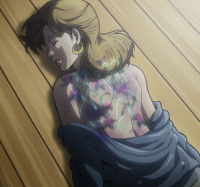 The next day, as Avdol walks to the kitchen, he comes across Holy's unconscious body slumped in front of the refrigerator. He discovers translucent rose vines growing from her backside and concludes it to be her Stand manifesting. However, due to Holy's kind nature, she lacked the willpower to manifest it properly and it was slowly killing her instead. Jotaro and Joseph arrive at the scene, where Joseph acts out in rage having his worst fears assured. Taking the initiative, Jotaro asks for a way to save her, but apparently the only way to do so was to kill DIO. Using a photo previously taken with Hermit Purple, Jotaro uses Star Platinum to identify a fly lingering in the darkness behind DIO. Avdol recognizes this fly and determines it to be of a certain species found only in the Aswan region of Egypt, thus leading them to assume DIO was in that location. Kakyoin appears and confirms their suspicions, stating that he had met DIO in that area on a family vacation. 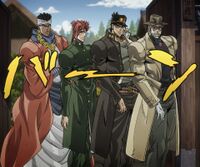 In another location, DIO uses a power similar to Hermit Purple to take a photograph of the Joestar group. Joseph becomes cautious after sensing them being watched and tells Jotaro to stay alert for any trouble. The episode finishes with a small insect flying inside the group's plane...

Commentary
“
The direction and storyboard were in Toshiyuki Kato's care, one of the main members of the JoJo team. Because it was a calm transitory episode, the director had to be skilled enough to make it interesting. Seeing the end result, choosing Kato was clearly a good call.

I like the atmosphere of the big traditional Japanese house, especially the sound of the Shishi-odoshi (scaredeer). Let's note that the sliding doors are only 1.8 meter tall in this house. But Jotaro and his companions stand above 1.9 meters, and must bow a little to walk around. Joseph is confronted with Japanese culture, that's a first. Mr. Kato's directing underlines all these details remarkably well.