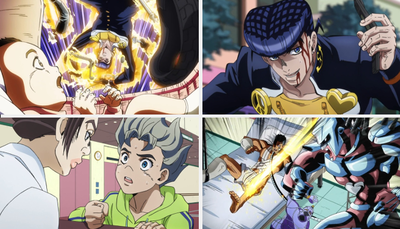 Highway Star, Part 2 (ハイウェイ・スター その2, Haiwei Sutā Sono 2)[1] is the twenty-ninth episode of Diamond is Unbreakable and the one hundred third episode of the JoJo's Bizarre Adventure anime. It covers Chapter 387 through Chapter 391 of the manga.

Josuke is chased by the Stand Highway Star and must ride on a motorcycle across Morioh to evade it. As he needs to find the User, he calls Koichi for help.

On the run from Highway Star, Josuke devises a plan to contact Koichi to determine who and where the enemy Stand's user is. After learning that Highway Star can teleport, Josuke abandons his initial plan of using a payphone and instead steals a cellphone to contact Koichi. During their call, Koichi remembers a news story about a drunk driving accident in the tunnel where Highway Star first appeared; after some contemplation, Josuke comes to the conclusion that this John Doe must be the Stand user, and Highway Star is his means of speeding up his recovery. Josuke heads to the hospital where the user is at while continuing to evade Highway Star through various convoluted means.

Meanwhile, Yoshihiro expresses joy at the viability of Highway Star, despite its user being a crippled accident victim. Kira flies around giddily, though he admits that it would've been more satisfying to see Josuke die.

Koichi reaches the hospital but is unable to find out anything about John Doe because visiting hours are over. Desperate for information, Koichi sends out Echoes ACT3 to increase the mass of and tip over several expensive medicine bottles. The administrator ends up at Koichi's mercy and is forced to tell him that the man he is looking for is Yuya Fungami in Room 525, just in time for Josuke to come crashing in. Hearing this new information, Josuke rushes into the elevator, with Highway Star in hot pursuit. Since ACT3 is able to stop only one of the enemy Stand's feet at a time, it eventually catches up with Josuke and starts feeding off of him. However, Josuke still has enough strength to make it into the room, where he sees Yuya being spoiled by three of his fangirls.

Josuke is angrily reprimanded by the girls and talked down to by Yuya, who demonstrates his enhanced sense of smell by pointing out a rotten peach, detecting which girl is on her period, and smelling the adrenaline caused by someone's anger. Yuya tries to determine which of his fangirls is the angry one, only to learn that it's actually Josuke, who'd been drinking from Yuya's IV bag to replenish himself. Josuke reveals that he has enough strength for Crazy Diamond to punch faster than Highway Star can run, and forces Yuya to release Rohan before preparing to beat the smug thug up. Yuya and co. point out that it would be cowardly for Josuke to attack a crippled man, at which point Josuke reveals that Crazy Diamond already healed him. Josuke beats Yuya senseless and throws him into the fountain right outside the hospital entrance, prolonging his stay; the narrator explains that Yuya is now unable to use Highway Star or else Josuke will kick his ass. Back at the tunnel, Josuke uses Crazy Diamond to heal Rohan, who condescendingly states that he would've preferred dying. Koichi takes his dog Police out for a walk to end the day, while back at the Kosaku household, Shinobu notices a stray British Blue cat that wandered into their basement. 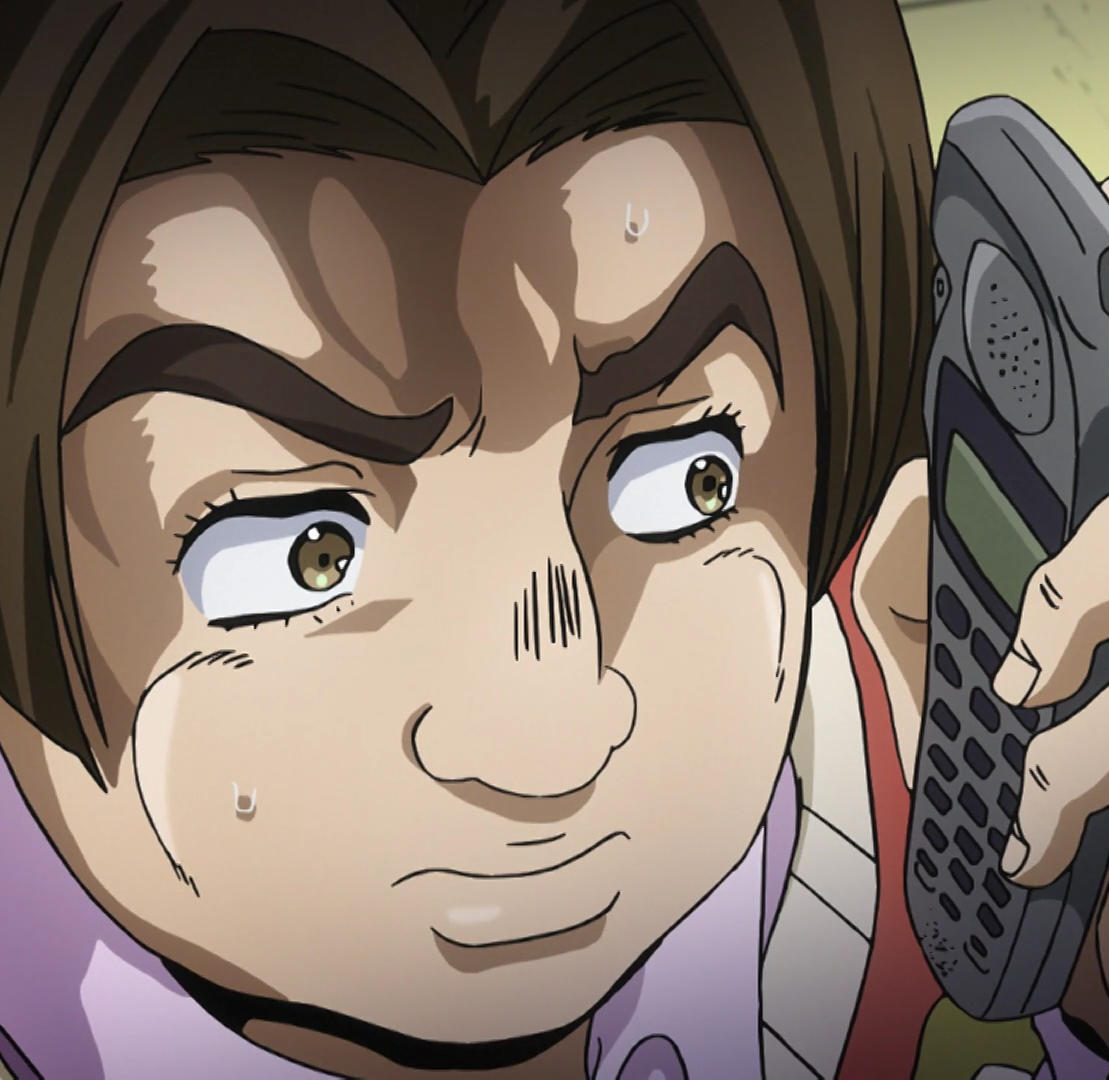 “
Drawing a moving motorcycle by hand is very exhausting. And while I wasn't directly involved in drawing it, the faces on the other animators… phew. I thought the storyboard was bad enough, but it was even worse when I saw the sheer amount of key frames the animation directors had. Better be prepared when you’re dealing with a car chase scene. (laughs).

When Highway Star absorbs its victim’s nutrients, they become a little transparent, leaving their skeleton exposed. We achieved this effect by messing around with the layers display. It's actually simpler than it looks. The skeleton’s appearance does give the impression that one’s energy is being sucked away. Yet another visual trick we owe to Mr. Araki.

Just after Fungami’s defeat, we added an original scene between Josuke and Rohan. It's essentially the conclusion of the feud between these two going back to episode 27. It was inevitable that this particular story would come to an end. It apparently pleased the fans, so I’m reassured.
”
—Naokatsu Tsuda, Blu-Ray limited edition commentaries