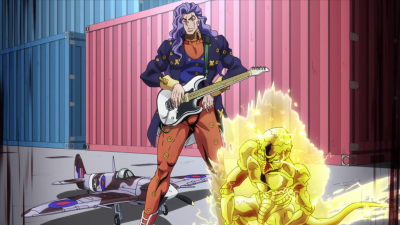 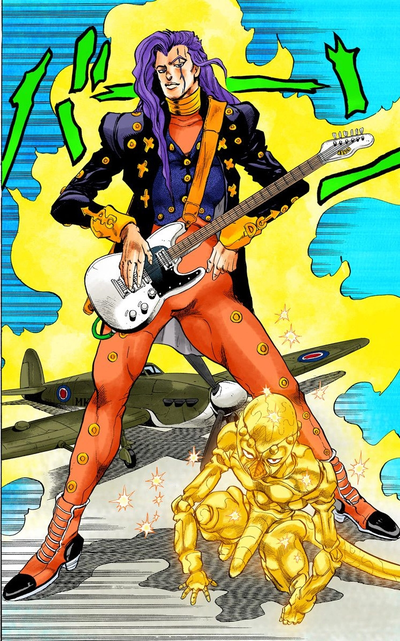 It narrates the battles between Okuyasu and then Josuke against Red Hot Chili Pepper and its User Akira Otoishi as they try to stop them from assassinating Joseph, who is coming to Morioh.

Tomoko scolds Josuke for playing too much video games, forcing him to lose. After he changes the channel, Red Hot Chili Pepper appears in the program and attacks Josuke from the television to provoke him. Using Crazy Diamond, Josuke surprises Red Hot Chili Pepper with his speed but allows him to get in a single hit, knocking him back from the sheer power. Jotaro meets with a strange man from the Speedwagon Foundation who reveals that Joseph Joestar will be arriving in Morioh Harbor the following afternoon.[1]

The group is assembled by Jotaro in a wide open field in an attempt to avoid power lines; but from a motorcycle, Red Hot Chili Pepper eavesdrops on the plan to receive Joseph and utilize his psychic Stand Hermit Purple to locate the user. With this new information Red Hot Chili Pepper plans to kill Joseph before the group can receive him and attempts to flee the scene, but is stopped when Okuyasu closes the space between them with The Hand.[2]

The group gathers once again, this time at Morioh Harbor. They discuss a way to protect Joseph from Red Hot Chili Pepper deciding that Josuke and Koichi will remain on the docks while Josuke and Okuyasu take a motorboat out to the Speedwagon Foundation boat. Red Hot Chili Pepper's user reveals himself as Akira Otoishi stating that Jotaro's observation, while astute, underestimates the amount of time it would take for Red Hot Chili Pepper to reach the boat. Akira also claims to be able to blow off Josuke's arm with just his pinky, but is taken by surprise when he breaks it with a swift punch.[5]

Akira opens the battle by playing a guitar solo to fully express his anger, breaking his pinky back into place. Josuke initiates but is shocked to realize he completely missed, facing in the other direction. Koichi points out how it was not Akira who moved but Josuke who had been moved by Red Hot Chili Pepper, who appears from the grates below and lands an attack on Josuke. He continues to use the grates to get the better of Josuke who has been punching the ground in the confusion. Josuke asks Koichi to tell him where the next attack is coming from, noting that he had reverted the concrete to its original components making the ground sticky. This allows Josuke to land a successful blow on Red Hot Chili Pepper.[6]

Cornered, Red Hot Chili Pepper concentrates all of Morioh's power to himself to flash a bright light that blinds Josuke and Koichi. Using that power he is also able to overpower Josuke and launch him back into a forklift. Before he is able to launch the final blow Josuke repairs a tire from the forklift which surrounds Red Hot Chili Pepper. Despite this he attempts to free himself, but the air pressure from the popped tire launches him into the ocean and destroys his Stand form.[7]

All seems well until Koichi notices that Akira has disappeared and has infiltrated the Speedwagon Foundation boat. On the lookout, Okuyasu notices two crew members aboard and questions them which ultimately proves futile. Red Hot Chili Pepper launches an attack on Joseph but is luckily stopped when Okuyasu attacks and defeats Akira, revealing to the captain he was going to attack them both to be sure. Finally, Joseph arrives at the harbor and is met by a quiet Josuke and they have a moment of closeness.[8]