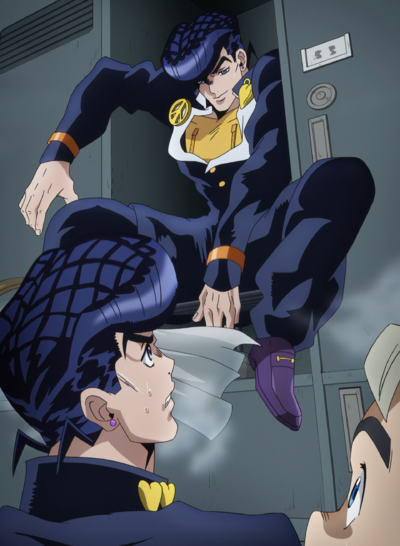 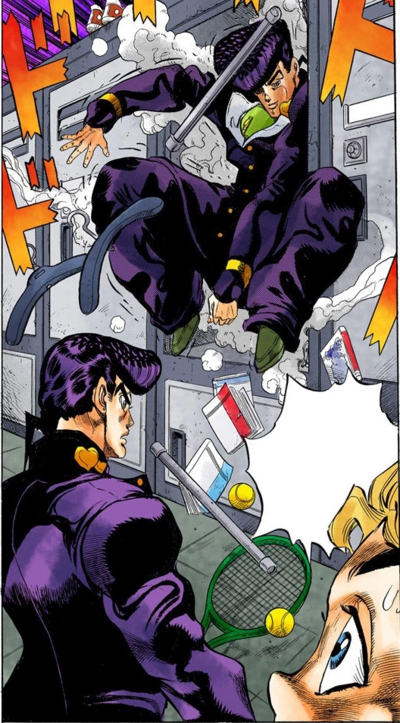 It narrates the battle between Josuke, Koichi, and Toshikazu Hazamada whose Surface impersonates Josuke and tries to assassinate Jotaro.

Tamami Kobayashi approaches Josuke and Hirose, informing them of a possible Stand user, the third-year student Toshikazu Hazamada, in the same school as them. Determined to look more into the story, Josuke and Koichi head to school to find Hazamada.

Hazamada spying on the protagonists

After finding Hazamada's locker, they find a marionette doll inside. The doll copies Josuke's appearance and assumes his identity.[1] It manipulates him into beating Koichi and tells him of his plans to kill Jotaro with Surface disguised as Josuke.[2] Hazamada reveals himself before they leave to find Jotaro, but not without Koichi leaving an onomatopoeia mark on Surface with his Stand, Echoes. On the way, Hazamada wreaks havoc on the streets, attacking Tamami and a group of bikers.[3]

Josuke and Koichi eventually track them down before they can kill Jotaro, but the marionette Stand controls Josuke into nearly stabbing Jotaro in the back. One of the bikers tackle Hazamada before he can continue, foiling his plans and later hospitalizing him.[4]