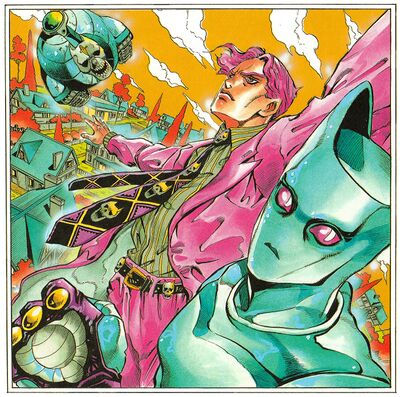 It narrates the battle between Jotaro, Koichi, and the sub-Stand Sheer Heart Attack, and Kira's subsequent change of identity through Aya Tsuji to escape the Joestar Group.

One day, Koichi meets Jotaro, who is investigating the button Shigekiyo's murderer has left. They stumble upon the one store where the owner offers to repair clothes as a side business, but just before they learn of Kira's name, a new Stand attacks Jotaro and Koichi.[1] Sheer Heart Attack is a miniature heat-seeking bomb which proves invulnerable to Star Platinum's punches on top of its great range, allowing Kira to depart with his jacket. Koichi makes a blunder by trying to scout for the murderer, and Jotaro has to protect him from a blast with his body, taking him out.[2]

Koichi is alone against Sheer Heart Attack. He manages to call Josuke for help but the enemy Stand threatens to kill him and Jotaro. Koichi's resolve strengthens and Echoes evolves again, gaining the power of greatly increasing the weight of its target.[3] He immobilizes Sheer Heart Attack and at the same time, Kira feels the effect of Echoes' power, forcing him to go back confront Koichi. Kira defeats and almost kills Koichi, but Jotaro wakes up to pummel Kira into unconsciousness before fainting himself.[4]

Kira wakes up and notices that Josuke and Okuyasu have arrived and have healed Koichi and Jotaro. Impatient to escape, Kira asks Josuke to 'fix' him as he fixed Jotaro and Koichi, revealing to Josuke that he can see Stands and thus is the murderer. Cornered, Kira cuts his own hand off to release Sheer Heart Attack and prevent Echoes ACT3's ability and flees. Josuke uses Crazy Diamond's ability to make the severed hand chase after him.[5] Kira escapes by forcing Aya Tsuji and her Stand Cinderella to switch his face and fingerprints with Kosaku Kawajiri's, successfully stalling the protagonists' chase.[6]