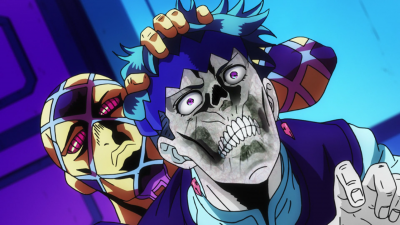 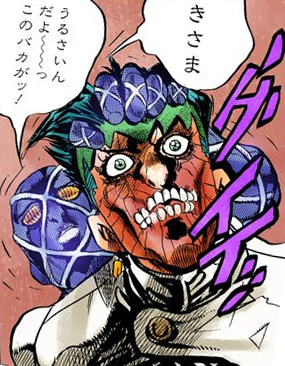 It narrates Rohan's ambush by the Stand Highway Star, and its chase after Josuke across Morioh as he tries to reach Highway Star's unknown User.

Josuke finds Mikitaka with a woman claiming to be his mother, but Mikitaka says he merely brainwashed her to believe that he is her son.

Josuke goes on the bus and finds Rohan sitting down, and the two have a brief confrontation. Rohan spots what appears to be a room in a tunnel in which a man bends over and severs the hand of an unconscious woman.[1] He asks Josuke to look but Josuke thinks Rohan is trying to pick a fight with him. Thus, Rohan decides to investigate the tunnel on his own with his motorcycle.[2]

Highway Star traps Rohan in the room and absorbs his nutrients to heal its user. Josuke felt guilty so he came to check up on Rohan and intervenes, but Rohan saves his life and sends him flying out of the tunnel.[3] Highway Star chases Josuke but he hops on to Rohan's motorcycle and decides to go look for the user. While Highway Star relentlessly pursues Josuke, he encounters various obstacles before he is able to call Koichi. Koichi discovers the Stand user is in the hospital and goes there himself to figure out what room he's in.[4]

Josuke arrives at the hospital in the nick of time and manages to close in on Highway Star's user, Yuya Fungami, after nearly having all of his nutrients drained. In order to not feel bad harming an injured person, he fully heals Yuya before pummeling him with a punch barrage, sending him flying out the window and into a fountain.[5]