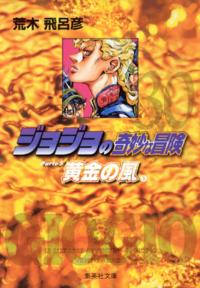 Hirohiko Araki's afterword, written in the first volume of the Bunkoban version of Vento Aureo.

Recently, I've managed to calm myself down quite a bit... Well, let's just say that instead of arguing, which is something that tires me out, I prefer obeying what I'm being told. During the time I was writing Vento Aureo, I really tormented myself in regards to the matter of "self-censorship" in Shonen Manga. By "self-censorship," I'm talking about the requests from the editorial board to an author to stop drawing or, at the very least, soften certain elements of the story which haven't been deemed presentable (for example: discriminatory phrases, expressions which might appear racist, the way skin color is drawn, violent scenes or abuse on both the weak and animals, callbacks to real-life crimes, the representation of nude bodies, smoking or drinking habits, etc..) I wanna make it clear right away that what I am about to write here isn't a critique towards my editors, but simply the real sensations that I, Hirohiko Araki, felt while writing Vento Aureo.

Having reached the fifth part of the series, I desired to write a story which would deal with topics such as the deep sadness in us human beings, or the pain of being born into this world, and I wanted to do it in a stronger manner than the previous parts. Depending on the circumstances in which they are born, there are people who are lucky from the very start, but how would these individuals act if they had been born in a different place instead, one with much harsher conditions? In Vento Aureo, all the protagonists have, in one way or another, been estranged from society and forced to live on its boundaries. We are talking about an environment in which the strong eat the weak and one where evil pervades everything. In such a situation, is it still possible for these characters to find justice?

When representing the clash between good and evil, it is necessary to describe evil in a realistic way, and it's here that the power of "self-censorship" in Shonen Manga really strikes the heaviest of blows in the story that you're trying to write. Smoking, being relentless towards the weak, sexually molesting an individual, stabbing someone with a knife, cutting off heads, abusing men and women, gouging eyes out, eating brain matter: all these are examples of pure evil. To express the evil shadows of human beings a minimum of cruelty and brutality is essential.

Despite having happened sporadically in previous years, as soon as I started Vento Aureo (around 1996), the editorial board suddenly started sending me more and more requests along the lines of "fix this page", "change that line", "modify this drawing" and so on. I would like to show you precisely which dialogues and pages I'm talking about, but it would be a long list so it's better to leave that out for now. Additionally, these requests were rarely motivated (even if they were, they were never in a convincing manner), the indications given to me were typically like, "...well, it's just that there is kind of regulation, plus the deadline is close and things just go like this with the board. C'mon hurry up and fix it! You'll think about the rest right?!”

I'll say it again, this is absolutely not a critique in regards to my editors, nor am I insinuating that they developed an unprofessional attitude towards me. (Truth is that I've always been very grateful to my editors!) All I'm trying to say is that during the period I was writing Vento Aureo that sensation was there with me. It's nothing else but a simple personal impression.

With all that said, it's easy to imagine just what type of crisis I was in and how difficult it was for me to successfully express, in a satisfying manner, the themes that I was trying to develop. Moreover, I kept asking myself if by any chance a "wall" had been indefinitely built to limit the liberty of expression, if the possibilities for artistic development in manga had run out, or if the ideology of authority and non-stop profit weren't completely stripping away the sprouts of art itself. Even now, despite being in a much more relaxing condition, I can't give myself a definitive answer, but what I felt in that era naturally transpired into the actions and attitudes of my characters.

Giorno and Bucciarati, two of the protagonists, betray the organization which they are part of for the sake of 'justice'. The organization is a symbol of power and moral obligation, almost a second home for them, but they both decide to fight to follow the desire of living according to justice. Even I, as the author, while drawing these scenes felt courage swelling up inside of me. Thinking back on the sentiments of my protagonists never fails to bring tears to my eyes. If these two boys had decided to remain in the shadow of authority, maybe they would have gone on to live safe and comfy lives. Instead, despite knowing the risks, they chose the path of justice, because only in its presence would they have been certain their existence actually mattered. Vento Aureo, between great Italian fashion and all the more creative Stand battles, is a story full of suspense, but I also think, according to my judgment as an author, that it can be considered a really dark work. Having said that and considering how at times we can take on such heavy subjects, I am very proud of it. Just like with all the other parts, I hope with all my heart that you have fun reading it. Regarding the parts that I had to cut, I will talk about this in the afterthoughts of the last volume.

Other languages:
English • português do Brasil
Retrieved from "http://jojowiki.com/index.php?title=Interview:Vento_Aureo_Bunko_Vol._1_(March_2005)&oldid=698264"
Categories: