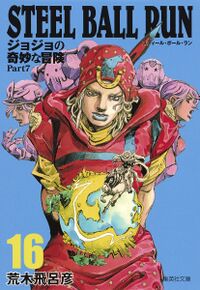 Hirohiko Araki's afterword, written in the final volume of the Bunkoban version of Steel Ball Run on January 18, 2018.

“
At the end of Volume 1 of this edition of Steel Ball Run, I had shared some memories which encompassed the entirety of the JoJo's Bizarre Adventure series. As such, I want to now focus on writing something more specific about its endings.

This may seem like a given when creating a manga series, but between the writing, researching, personal anxieties, etc...the beginning of a manga serialization can be a pretty tough undertaking. However, when it comes to ending a series, I’m under the impression that the task is even more challenging.

It'll depend on the work, but there are times where the editorial department or the manga author themselves will want a series to approach some kind of conclusion. Even if that's the case, requests from the audience can make it difficult for an author to write that closing word, "End." During this time, it's always necessary for us as authors to separate ourselves from the characters that have accompanied our story, the ones we've grown attached to as the days go by, the ones we've shared many important moments with. Similarly, it is also necessary to leave behind the setting and world that we've created and built up. On the other hand, we can’t abandon the answers behind the main mysteries or the destinies of our characters. We must close the curtain in the best way possible. “Will this ending satisfy the readers?” This sort of doubt generates anxiety and a certain sense of importance. Even after we finally finish drawing, there's a certain sensation that nothing else remains and you start to ask yourself: “What do I do now?!” This is what happens with the end of a serialized manga.

It may also happen to have a strong ending like in this case, but with this work and for the third part of JoJo, Stardust Crusaders, I chose a plot structure that had a very obvious finish line and readers would be aware of the fact that a conclusion would be inevitable. So, without a sense of loss or desperation, the closure was nothing else but a way to conclude a journey and so this way I could finish as necessary. When I reach the finishing line of these works, I only had the feeling of having completed a task and of having obtained a good result, and that gave me a sense of gratitude.

One of the ending scenes of Steel Ball Run that I particularly enjoyed drawing is the one in which Johnny and Gyro confide their personal secrets to each other and Gyro reveals to his friend his true name, while Johnny tells him about his fetish. They were just frivolities, but can a secret become eternal? Or, if one survives, will that secret continue to live on in their heart? While I was creating those panels, I found myself crying.
”
—Hirohiko Araki

Other languages:
English • português do Brasil
Retrieved from "https://jojowiki.com/index.php?title=Interview:Steel_Ball_Run_Bunko_Vol._16_(January_2018)&oldid=698251"
Categories: