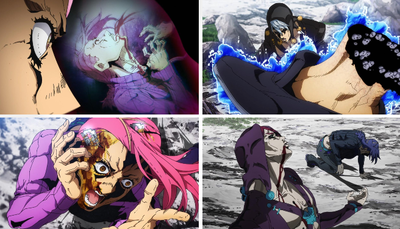 King Crimson vs. Metallica (キング・クリムゾンvsメタリカ, Kingu Kurimuzon bāsasu Metarika)[1] is the twenty seventh episode of Golden Wind and the one hundred fortieth episode of the JoJo's Bizarre Adventure anime. The episode covers the second half of Chapter 544 to Chapter 547 of the original manga.

The battle between Vinegar Doppio and Risotto Nero begins. While Risotto's ability has yet to be explained and he has an advantage as a seasoned assassin, the Boss grants Doppio a portion of King Crimson's ability.

The sole survivor of La Squadra Esecuzioni, Risotto Nero, is now confronting Vinegar Doppio, who is secretly the unwitting host of the Boss, though believed to be his trusted subordinate instead. Wanting Doppio to get close to Risotto Nero to kill the assassin, the Boss has granted Doppio with a portion of his Stand, the sub-Stand Epitaph responsible for seeing into the future and the arms of King Crimson.

Doppio thus forecasts the future and sees that Risotto will approach him, somehow camouflaged among the rocks. More alarmingly, a pair of scissors will appear in his throat. Wanting to prevent this, Doppio runs toward Risotto's future location and tries to attack but misses the assassin. Risotto notices Doppio's unusual ability and does make the scissors appear and opens them to cut out his throat. However, Doppio immediately pulls the scissors through the skin, saving himself while the assassin is intrigued by Doppio's quick reaction. Noting that Doppio can predict attacks, Risotto vows to make his next attack a sure kill and disappears before Doppio can punch him with King Crimson.

Risotto's foot is severed as foreseen by Epitaph

Already drained, Doppio then foresees a pair of scissors and a severed foot flying. Anticipating the worst, Doppio calls the Boss and reveals that he may lose his foot soon. The Boss thus orders Doppio to retreat immediately, but Doppio is too weak to run, Risotto's methodical strategy ensuring that his targets will always be at their weakest. As the Boss himself becomes worried at the risk his host faces, Doppio sees razor blades emerging from a frog and realizes that the objects Risotto makes appear are made out of the iron within all organisms. Using the frog as a clue, Doppio guesses Risotto's position and throws the scissors with King Crimson, severing the assassin's foot. In reality, the forecast was showing Risotto's severed foot.

Risotto's power of magnetism is revealed and the assassin is now on the ground. The Boss thus wishes to come out and personally execute Risotto but is interrupted by the sight of Risotto's foot flying right back at its owner and metal staples appearing to stitch the foot and ankle together. Incidentally, the worms-like Stand of Risotto, Metallica, briefly appears from the wound. Risotto realizes that Doppio is directly connected to the Boss and hides his true nature. Standing up and hiding again thanks to the particles of iron to camouflage himself, Risotto swears revenge for his fallen comrades and prepares to attack again.

Doppio foresees iron knives flying toward but fails to deflects them because of his weakened state. Harrassing Doppio time and time again, Risotto explains that he is already done for because he's extracted so much iron from his body that he now lacks the hemoglobin needed to carry oxygen to the organs; in a few minutes Doppio will die regardless. Meanwhile, Bucciarati, Narancia and Abbacchio have revealed themselves near the Costa Smeralda, making the Boss urge Doppio to finish him off. But things seem hopeless as Doppio foresees Risotto disappearing and his own head being blown off. The forecasted vision begins and Risotto disappears. Grabbing one of the knives, Doppio is told to stand down so that the Boss can erase the predicted timeframe. However, Doppio notes that the Boss won't make it in time but uses the scalpel as a compass needle indicating the direction Risotto is in. Throwing the knives, Doppio completely misses, having been baited into attacking Risotto's severed foot instead. Making a huge razor blade appear and slice into Doppio's forehead, Risotto prepares to finish off his foe whom he's already guessed is the Boss sharing a body with a split personality.

The Boss uses Aerosmith's CO2 radar to win against Risotto

Suddenly, Risotto is shot down from behind by Aerosmith. It is now The Boss's turn to explain his plan: knowing he couldn't do anything against Risotto by himself, he purposefully told Doppio to throw the knives in the direction of Team Bucciarati to grab their attention; they would then use Aerosmith whose CO2 radar would only detect Risotto, Doppio being hidden by his inability to breathe properly. As the second volley of bullets tears into Risotto, the Boss declares his victory.

“
For episodes involving only minor characters, they still contain a highly engrossing story. That just goes to show how well-developed the characters are. All of them are so vibrant! And these two episodes bring further dimension and weight to the Boss's character.
”
—Junichi Suwabe, Blu-Ray limited edition commentaries
“
Soma Saito as Doppio was so powerful, it was all I could do to keep up! Of course, I also had to keep my cool. When Doppio's "Click!" in the phone scene came around, though, I almost lost it. And Katsuyuki Konishi was sending out terrifying energy of his own. That session would have crushed me if I hadn't given it more than my absolute best.
”
—Shinshu Fuji, Blu-Ray limited edition commentaries
“
1. Enemy vs. Enemy

Production Coordinator Tsuneoka highlights the battle between Risotto and Diavolo. “Both of them battle with expressions, intensity, and Stand abilities that you don't get to see elsewhere. The outcome is unpredictable because it is the only instance of an enemy vs. enemy battle in Golden Wind. Enjoy it all unfolding!”

2. Risotto Disappears with the Power of Metallica

Tsuneoka recalls that Risotto was going to be more transparent, and had gone ahead with that until he heard staff say that it would be a shame to not see more of him. “We edited his lines to be more prominent. If they hadn't spoken up, Risotto's cool pose may have not been visible.”

3. The Colors Pay Tribute to Risotto

Similarly, the colors in the scene where Risotto is shot were changed due to Director Shinji Osada, who proposed a dramatic exit for the final Hitman Team member. “Nagata's vision was 'a funeral'. We had Hiroko Sato, the color designer, create a palette. Sear Risotto's majestic end into your mind, and maybe hate the Boss for it."

Viewers may have noticed a difference in the shadows and lines in this episode. This is because Hironori Tanaka was the animation director. Tsuneoka reveres his work: "As you can see, he's incredibly skilled. I got emotional every time I looked at his frames. He includes so much detail into every frame! I hope viewers take their time watching this episode
”
—Shugo Tsuneoka, Blu-Ray limited edition commentaries