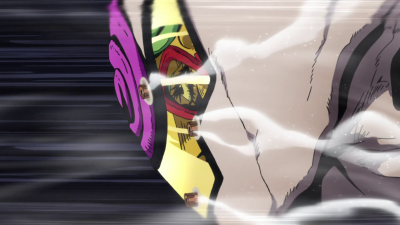 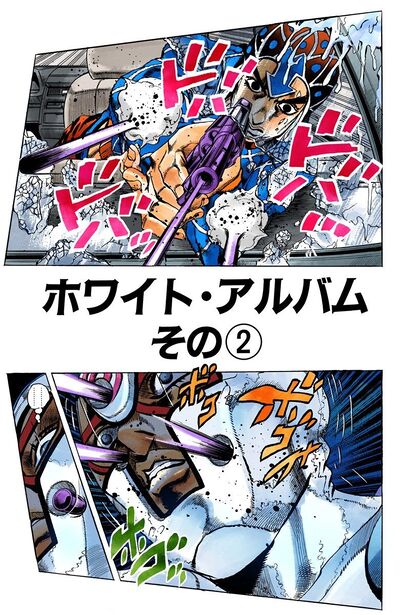 It narrates the battle between Ghiaccio, who wears a suit of seemingly-invincible ice armor, and the duo of Giorno and Mista, as all three try to reach Venice to retrieve a mysterious item.

A flashback narrates Mista's past. Guido Mista was once a simple young man enjoying the daily pleasures of life. When he was 17, he interrupted a man beating another woman, angering the thug's companions. Though all three of the thugs tried to shoot him, none of the men could hit Mista as he calmly took the first thug's revolver, reloaded it, and killed all three of them. Mista was then arrested, and under the law he was expected to serve 15 years in prison. However, Bucciarati noticed his talent, pulled some strings, and managed to have him recruited into the gang.

En route to Venezia to retrieve a computer disc, Giorno and Mista realize that their car is freezing over.[1] Though they manage to knock the enemy, Ghiaccio, off of their car, he reveals his armor-like White Album and chases the two.[2] Giorno drives the car into the lake, where he and Mista force Ghiaccio underwater.[3] Mista finds a breathing hole near White Album's neck and attempts to shoot into it, but Ghiaccio's Gently Weeps redirects the bullet back at him.[4]

Ghiaccio finds the disc, but Mista and Giorno manage to impale Ghiaccio on a metal pole. Mista is heavily wounded during the battle, but Giorno manages to finish off Ghiaccio. Giorno subsequently retrieves the disk and heals Mista as the rest of the team joins them.[5]