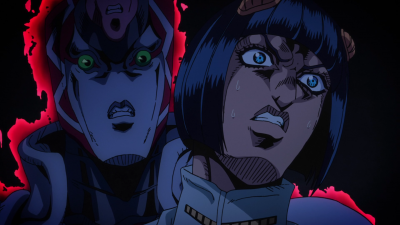 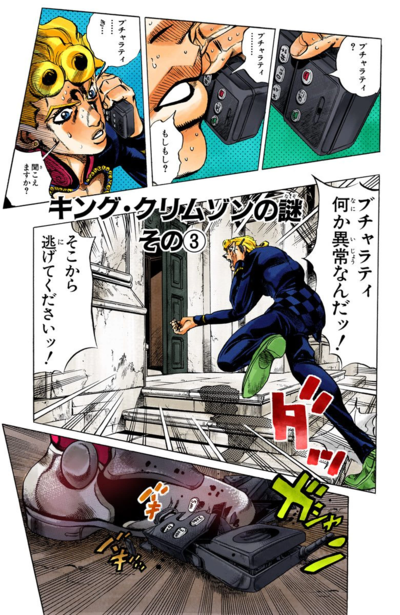 The Mystery of King Crimson (キング・クリムゾンの謎, Kingu Kurimuzon no Nazo) is the fourteenth story arc in the fifth part of JoJo's Bizarre Adventure, Vento Aureo.

It narrates the clash between Bucciarati and the boss, whose King Crimson's time erasure power overwhelms Bucciarati, as well as the former's escape.

The group arrives at San Giorgio Maggiore, where Bucciarati reads the boss's orders: only one member of the group is allowed to set foot on the island as Trish's escort to the church's basilisk. Bucciarati ultimately accompanies Trish into the church, only to discover that Trish has disappeared midway through their ascent in an elevator.[1]

A flashback reveals Bruno Bucciarati's past. When Bucciarati was 12, his father witnessed a drug deal, and was subsequently shot and left for dead. The two drug dealers later tried to finish him off, but Bucciarati killed them both. Having to seek protection, Bucciarati enlisted in Passione; he believed at the time that the gang was fighting against the proliferation of drugs, only to realize that they were also involved in the market.

Bucciarati, again angered by the boss's actions, decides to openly betray the boss and pursues him to the basement.[2] There, the boss reveals his Stand, King Crimson, and its power of time erasure. Bucciarati is fatally injured by the boss's power, but manages to escape with Trish.[3] Unwilling to reveal himself, the Boss goes back into hiding, swearing to kill the traitors. Giorno attempts to heal Bucciarati with Gold Experience; though initially he appears to be fully healed, Giorno soon notices that Bucciarati feels no pain and that his hands have become cold.

Bucciarati subsequently announces to his team that he has officially betrayed the boss. With the exception of Fugo, the team chooses to side with Bucciarati.[4]