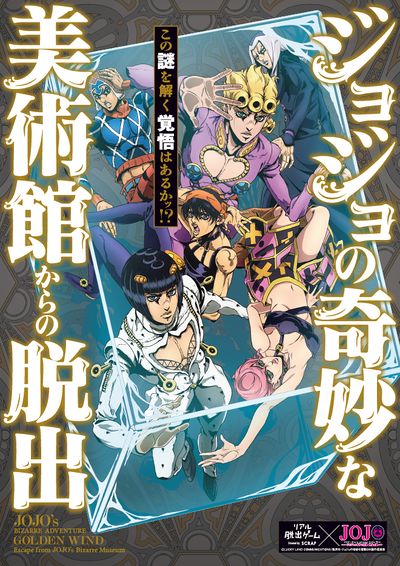 The escape room was held nationwide at 30 Japanese cities.

Team Bucciarati awakens to find themselves inside a room of the mysterious "Trappola" museum with six strange showcases aligned in front of them. The group's own Stands can be seen inside the displays and they soon realize they are unable to call them back. A voice from a man named Scatola can be heard telling them that once 60 minutes have passed, their Stands will become real sculptures and they will die as a result. The team will need to quickly figure out how to free their Stands and escape the museum.

As an interactive escape room-styled attraction, the game requires the players to solve the mystery as Team Bucciarati and escape a room within a 60 minute time limit. Players attempt the challenge in groups of six and will be given Stand-like tools to help solve the mysteries within the room.

A stand fortune telling game is also available on the website. Users can input their name and the site will decide which stand they would receive (out of those owned by Team Bucciarati) and tell their fortune.

Example puzzles were available on the website for customers to try before arriving at the event. They are each based on a member of Team Bucciarati.

Food was only sold at performances and included Mista's Special Salami Dog for 1,000 yen and latte art coffees with random coaster for 500 yen each. Stickers were also given with the purchase of food items and if all 12 were collected you would receive a "To Be Continued" sticker. Goods were purchasable at location and online. These included A4 clipboard for 2,000 yen, escape success/failure sticker set for 300 yen each, clear files with mystery for 800 yen or 4,000 yen for the full set, behind the scenes pamphlet for 1,000 yen, acrylic stand for 1,200 yen each or 7,000 yen for the full set, can badges for 500 yen each, salted caramel candies for 800 yen, notebook for 800 yen, sash bag for 1,800 yen, exclusive parka for 5,800 yen and pouch for 2,000 yen. Special sticky notes were given for purchases of 3,000 yen or more.