His Name Is Diavolo (story arc)

His Name is Diavolo 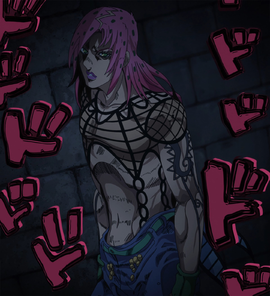 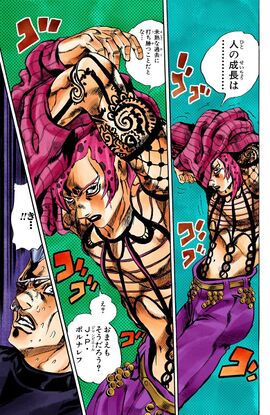 His Name Is Diavolo (そいつの名はディアボロ, Soitsu no Na wa Diaboro) is the twenty-second story arc in Vento Aureo.

It narrates Diavolo and Doppio's attempt at approaching Polnareff and killing him in the Colosseum before Team Bucciarati arrives.

Leading an injured Bucciarati toward the Colosseum, Doppio is told that Bucciarati is in fact undead and can only feel people's souls. Diavolo then disguises his soul as Trish's to gain his trust, and the two sneak past the rest of the gang.

Vinegar Doppio appears near the bottom of a staircase leading to Polnareff, he then transforms into Diavolo, who attacks Polnareff. After a brief exchange, Diavolo erases time with King Crimson but sees that Polnareff pierced his Silver Chariot with the Arrow. Silver Chariot then undergoes a transformation.