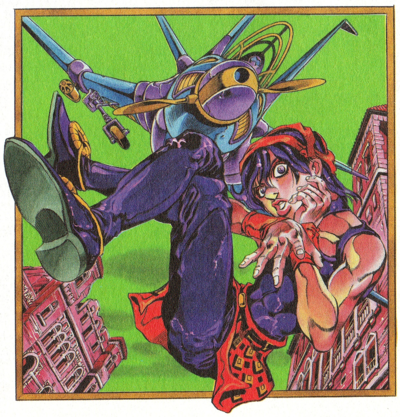 It narrates the battle between a slowly-shrinking Narancia Ghirga and Formaggio, an assassin from La Squadra Esecuzioni looking for the boss's daughter.

Pericolo explains that around two months ago, a woman named Donatella Una died of an illness. Before she died, she expressed her last wish: to see her lover, Solido Naso, one last time. However, Solido Naso never existed, having been nothing more than an alias for the boss. After learning of his daughter's existence, the boss sent Pericolo to retrieve her and put her into hiding. Pericolo reveals that a group within the gang are planning to kidnap Trish and learn the boss's identity, and thus Bucciarati must stop them at all costs. It is not lost on Giorno that this mission could be his only chance to learn the boss's identity. Meanwhile, one of the enemy group's members targets Bucciarati, having learned of Polpo's death from his associates.[1]

Narancia is dispatched on a shopping mission. After buying supplies for the gang, Narancia is surprised to encounter the assassin Formaggio in his rental car's backseat. Formaggio attempts to converse with an indignant Narancia before slashing the boy with his Stand Little Feet. Formaggio then demands to know why Bucciarati's group didn't attend Polpo's funeral; in response, Narancia deploys his own Stand, the miniature fighter plane Aerosmith, and begins shooting at Formaggio.[2] Aerosmith attempts to finish off Formaggio with a bomb, but the latter shrinks himself and escapes. Noticing Formaggio's disappearance, Narancia decides to call back his Stand. Formaggio, now atop the car, hops into Narancia's back pocket, content to let him search as his ability takes effect. Narancia finds his knife, but notices that it is too big to be his; he reacts similarly upon finding a shoe he had dropped during the shootout. He then gets into the car, only to realize that the seat is too big and he can no longer reach the pedals. At last, Narancia realizes that he is shrinking.[3]

A flashback details Narancia's past. Narancia's mother died when he was ten, leaving him in the care of his neglectful father. Narancia soon quit going to school, instead preferring to hang around with his friends and steal food for his meals. One day, a friend told him to dye his hair blonde so they would match; after doing exactly that, Narancia was arrested and thrown into a juvenile detention center, having been framed for murder. After Narancia was released from the detention center, his friends abandoned him, causing him to lose his will to live.

While scrounging for food in the trash, Narancia was spotted by a young man named Pannacotta Fugo. Fugo brought the young boy to a nearby restaurant, where Bruno Bucciarati handed him an order of pasta. Afterward, Bucciarati brought Narancia to a hospital, where his eye infection was gradually cured. As per Bucciarati's wishes, Narancia returned home to his father and began attending school once more. However, he secretly met the operative Polpo half a year later, and thus joined Bucciarati's organization.

Narancia decides to contact Bucciarati to warn him about the assassin. Though he is too light to activate the automatic doors, he calls forth Aerosmith to shoot them open.[4] Narancia attempts to use one of the phones inside, but realizes the line has been cut, and summons Aerosmith once more. Seconds later, he grabs Formaggio, having found the assassin within his pocket. However, Formaggio escapes by restoring a pen to its normal size, launching him into the air and to safety.[5] Formaggio tries to run away, eventually escaping into the sewers; coming to the realization that Aerosmith tracks the carbon dioxide he exhales, Formaggio uses a rat to mask his breathing. Narancia sees through the ruse and attacks Formaggio, but the latter grows just in time to minimize the injuries from a still-shrinking Narancia.[6]

Narancia attempts to hide, only to be confronted by Formaggio. Now towering over the boy, Formaggio steps on Narancia and demands to know Trish's location. As the narrator reveals, Formaggio's question is rooted in a personal grudge: two of his group's members, Sorbet and Gelato, were gruesomely killed by the boss himself. When Narancia refuses to answer, Formaggio pulls out a spider he found in the sewers.[7] As Little Feet immobilizes Aerosmith, Formaggio forces Narancia into a bottle with the spider. As the spider bites Narancia and begins to wrap him up, Formaggio notices a map that Narancia had dropped, detailing his route and thus his team's hideout. However, Narancia reveals that he shot a hole in the gas tank of a nearby car, and had been waiting for it to catch fire. The car explodes, lighting Formaggio on fire and reverting his ability. At last, Narancia returns to his normal size.[8]

Formaggio uses his own blood to douse the fire on his body and shrinks himself to escape. Narancia summons Aerosmith, but can't track him on account of the carbon dioxide released by the car's flames. Formaggio gloats about his escape, unintentionally revealing to Narancia his group's status as assassins. Narancia begins wildly shooting at all the cars on the street, cornering Formaggio and badly burning him. Formaggio returns to his normal size, having closed in on Narancia beneath the flames. Though Little Feet's greater speed gives it an advantage at close range, Aerosmith shoots Little Feet before it can reach him. A dying Formaggio warns Narancia that the worst is yet to come; Narancia then notices that his wallet and supplies have both burned up as a result of the battle.[9]