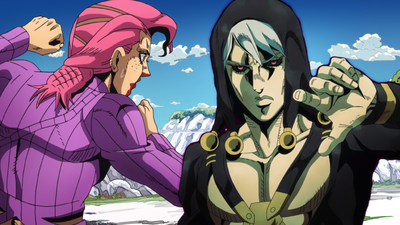 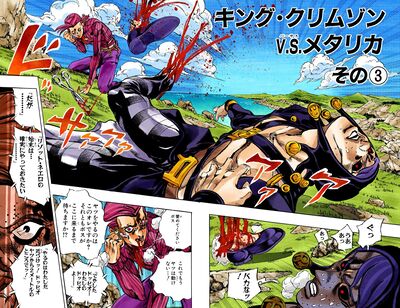 It narrates the tense battle between Doppio, who wields but a fraction of King Crimson, and Risotto Nero, whose mysterious power threaten to end both Doppio and the Boss' lives.

Doppio charges toward Risotto, but needles appear in his mouth, forcing him to pull them out as Risotto disappears into the landscape. Doppio then receives a "phone call" from the boss, who informs him that he's been granted part of King Crimson's power: in particular, its forecasting ability Epitaph, along with its left arm.[1]

Doppio uses Epitaph to predict Risotto's position, but attacks before Risotto reaches the foreseen position. Intrigued by Doppio's foresight, Risotto creates a pair of scissors within his throat. Doppio extracts the scissors from his throat, but loses track of Risotto in the process. After seeing a severed foot in Epitaph's prediction, Doppio is urged by the boss to flee. However, Doppio stands his ground, successfully deduces Risotto's position, and slices his foot off with the scissors, having deduced his ability to manipulate the iron within living organisms.[2]

However, Risotto simply begins stitching his foot back on with his parasite-like Stand Metallica. Camouflaging himself once more, Risotto explains that Doppio's lack of iron prevents him from absorbing oxygen into his blood, eventually killing him. As Bucciarati's team comes into both fighters' view, Epitaph shows Doppio losing a large piece of his head.[3] Doppio attempts to throw scalpels in Risotto's direction once more, but is misled by Risotto's severed foot, leaving Risotto an opening to attack.

Suddenly, Risotto is shot down by Aerosmith, as Narancia was alerted by the thrown scalpels and targeted his healthy breathing. Risotto's transparent blood covers Doppio's head as the boss takes over Doppio's body.[4]

A dying Risotto grabs the boss and lures Aerosmith into firing again, but King Crimson erases half a second to dodge the bullets. With Risotto dead, the boss is forced to drain the iron in a nearby frog's blood as Bucciarati and Narancia investigate the battle's aftermath. The two locate the ragged breathing of a person behind a rock, but it is revealed to be the drained body of one of the kids playing soccer nearby.

Abbacchio finds himself eating at a restaurant, and sees a policeman investigating numerous pieces of broken glass to find fingerprints. Abbacchio asks if the policeman isn't bothered by the effort and the possibility of the culprit being let off the hook; the policeman replies that he isn't looking for results, for people lose sight of reality if they do so. Abbacchio laments not having such integrity, but the policeman says that he regained it by fulfilling his duty to Bucciarati. Abbacchio recalls his mission and tries to return to his friends, before his old partner tells him that he can't: Abbacchio suddenly recognizes the policeman as his late partner.

On the beach, the team laments Abbacchio's death. Giorno is unable to heal him, having arrived at the scene too late, and wonders how anyone got so close to him. As Narancia cries profusely, Bucciarati coldly orders his team to withdraw from the area. However, Giorno spots a small rock in Abbacchio's hand and transforms it into a ladybug, which flies toward the small landmark present in Donatella's photograph and reveals a negative of the boss's face and handprints. The team proclaims Abbacchio's success as he and his partner watch over them from above.[6]