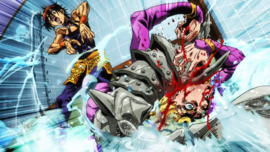 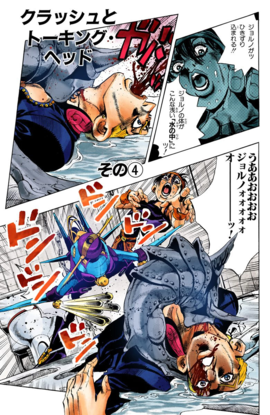 It narrates Narancia's attempt to warn the rest of Team Bucciarati as Tiziano's Talking Head forces him to lie and lure everyone near water, where Squalo's shark-like Clash lurks.

Still in Venice, Giorno's companions discuss about how to defeat the Boss. Trish wakes up and reveals that her mother met the Boss in Sardinia, in which they could learn of him.

Narancia is then attacked by the duo Tiziano and Squalo, Tiziano's Talking Head rendering Narancia unable to tell the truth and luring the group near water bodies so that Squalo's Clash can attack them. Giorno discovers the charade, but is incapacitated by the enemies. Giorno nonetheless advises Narancia to track the Stand Users instead, and he manages to discover where Tiziano and Squalo are hiding killing them both in a straight fight.

The gang then leaves Venice in search of an airplane.