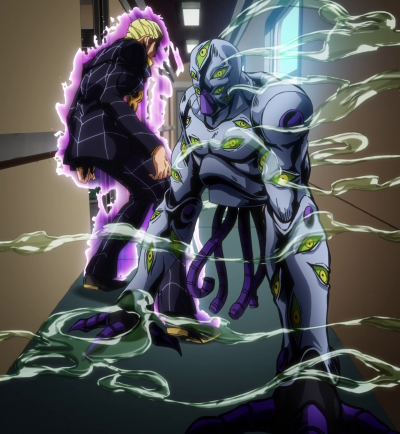 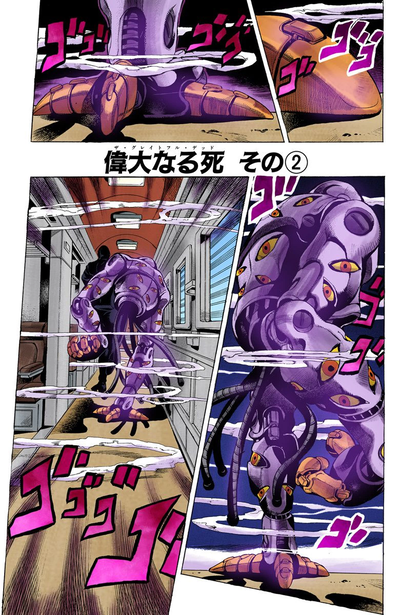 It narrates the lengthy battle between Guido Mista and Bucciarati against the duo of assassins Prosciutto and Pesci, who can respectively dramatically age and weaken people and hook people with a Stand fishing rod.

Unable to locate Bucciarati's gang or Trish, Prosciutto uses his Stand The Grateful Dead to make everyone on board the train grow older and older. The gang discover that keeping one's body temperature cooler can help to reverse the aging process (this "loophole" was meant to keep Trish from aging too fast).

Equipped with a few ice cubes, Mista exits the turtle in search of the assassins. He encounters Pesci and easily incapacitates him, stealing his ice cubes. However, before Mista can get any information out of Pesci, Prosciutto attacks and nearly kills Mista. Sex Pistols n. 6 returns to the rest of the gang in time to warn Bucciarati just as the two assassins discover the turtle. Bucciarati jumps out of the train taking Prosciutto with him, and uses Pesci's Beach Boy against him in order to save himself and throw Prosciutto from the train.

Prosciutto manages to barely survive, but his heavy injuries and certain death enrage Pesci. Bucciarati is forced to unzip himself into a dangerous amount of separate pieces in order to avoid Pesci's constant, quick attacks. In a final showdown between the two, Bucciarati unzips his own fist to deliver the final blow before Pesci can kill everyone inside the turtle.

The gang is no longer able to travel via the train. Trish reveals to Bucciarati that she can see Stands.[1]