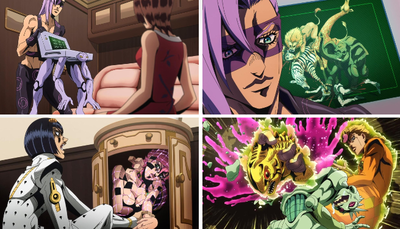 Baby Face (ベイビィ・フェイス, Beibyi Feisu)[1] is the seventeenth episode of Golden Wind and the one hundred thirtieth episode of the JoJo's Bizarre Adventure anime. The episode covers from the end of Chapter 500 to Chapter 505 of the original manga.

Team Bucciarati are stuck in the countryside and must quickly find a vehicle to use. At the same time, the assassin Melone is creating his newest version of the Stand Baby Face and educates him on how to best kill the team and retrieve Trish Una.

It is nightfall as one of the passengers of the express train locks herself in her first-class room and complains about the "common people". Suddenly, Melone comes in and begins to examine her every characteristic, searching her bag and noting everything he discovers on his computer. At first angry but growing afraid of Melone, the woman tries to flee but Melone's computer's suddenly grows limbs. The computer, Baby Face, slams her into the window and the woman somehow becomes pregnant.

Meanwhile, Team Bucciarati has hidden in a truck hoping to reach Rome. Inside of Coco Jumbo, Giorno and Narancia notice Trish's unease and Giorno privately wishes to observe her Stand to possibly get a clue about The Boss. The stowaways almost get discovered when Sex Pistols steals a burger and Mista is forced to knock the driver out. Thus the group is stuck on the sideways.

With one tap, Melone has created a "child" out of Bruno and a woman's blood sample

Some time later, the woman wakes seemingly unscathed while Melone has disappeared and summons a security agent to complain. Unbeknownst to her, a strange being created out her and Bucciarati's blood sample has crawled out and begins to remotely communicate with Melone, who teaches him to assassinate Team Bucciarati and capture Trish. The child eventually gets hungry and eats its mother, dividing her body into cubes before absorbing her and then immediately steals Melone's bike to go to its target. Taken by surprise, Melone is nonetheless confident that Baby Face's child is invincible.

Bruno finds Trish cubified inside a cabinet in the turtle

Arriving at a parking lot, the team argues whether or not it is wise to steal a car but Giorno solves the dilemma by turning several cars into frogs in order to throw away the assassins who would investigate the disapperances. Meanwhile inside the turtle, Trish complains that she cannot exit and pee but Bucciarati "creates" a toilet for her by opening a zipper as Giorno informs him they have acquired a ride. Suddenly, Giorno spots Melone's bike and while he is distracted, Trish and Bucciarati both get cubified. The enemy Stand informs Melone that he's fulfilled its mission and Melone orders it to kill Giorno who is in the way out, informing the rest of the assassins of his success. Isolated from the rest of the team who are trying to steal a car, Giorno notices Bucciarati and Trish' disappearance and sends Gold Experience inside investigate the room. When it opens the cupboard, the hidden enemy suddenly attacks and steals a cube out of Gold's Experience throat, thus Giorno begins to suffocate. With Melone's counsel, the enemy Stand effortlessly evade Gold Experience's attack and steals one of Giorno's eyes and foot. On the ground, Giorno nonetheless manages to force his enemy in the open by taking the key and discovers that his enemy was disguised as the furniture.

However, the baby Stand then morphs into a rock and hides again, allowing Giorno to get a grasp of his foe's abilities. Giorno finds himself at a grave disadvantage, unable to breathe, move or alert his teammates as well as the foe's cubification power making it both deadly and nimble. While Giorno tries to crawl to his allies, the Stand deals a fatal blow by stealing another piece of Giorno's throat. On the cusp of death, Giorno then has an epiphany. The Baby Face junior finally appears with the turtle in its hand. Sure of its victory, it prepares to start up the bike but Giorno suddenly appears behind it. Having witnessed Baby Face's ability, which is opposite to that of Gold Experience, Giorno manages to take random items and turn them into individual organs to heal. The battle takes a new turn as Giorno is now on the same level as his enemy.

Gold Experience attempts to punch Baby Face who evades the strike but is tied up by vines, forcing it to decompose itself and drop Coco Jumbo. Giorno leaps to take it but Baby Face seemingly appears to cut Gold Experience's hand off and absorb it. However, Giorno has foreseen the ambush and used a lure, having turned a piece of the bike into a fake hand which then transforms into a piranha eating its way out of Baby Face.