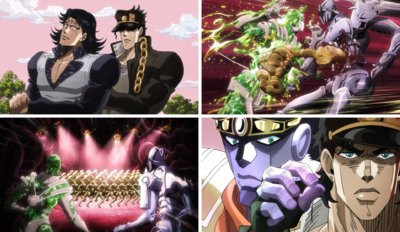 Lovers, Part 2 ( その2, Rabāzu Sono 2)[1] is the seventeenth episode of Stardust Crusaders and the forty-third episode of the JoJo's Bizarre Adventure anime. It covers the end of Chapter 163 through Chapter 165 of the manga.

The battle against Steely Dan continues. While Kakyoin and Polnareff have sent their Stands in Joseph's brain to hunt Lovers. Meanwhile, Jotaro has to act as Steely Dan's temporary servant.

As Jotaro continues to put up with Steely Dan's whims, Kakyoin and Polnareff's Stands arrive in Joseph's brain where the Lovers and the flesh bud is. Although Polnareff acts first, he is hurt when the Lovers uses Joseph's brain cells to disguise himself as Hierophant Green and make several dummies of itself, leaving them unable to determine which one is the real Stand. Elsewhere, Jotaro shines Steely Dan's shoes and takes a beating from him, all while taking note of everything he is doing for him so he can make Steely Dan pay later. He is enraged when he takes a beating because Steely Dan forced him to steal from a jewelry shop.

In Joseph's brain, Kakyoin manages to use Hierophant Green to find and attack the real Stand and force it out of Joseph's body, giving Joseph the opportunity to destroy the flesh bud in his brain with the Ripple. Realizing he has been defeated, Steely Dan tries to divert Jotaro's attention so the Lovers can enter him instead, but he is quickly spotted and caught by Star Platinum. In desperation, Steely Dan tries to have the Lovers enter a young girl's ear, but it is stopped by Hierophant Green's tentacle, which Kakyoin attached before it escaped. This stops Steely Dan's movements completely, allowing Jotaro to finally get his revenge for all Steely Dan put him through.

Commentary
“
Since a lot was happening inside Joseph's brain, we had to give the sensation of being confined inside a human body, but it wasn't an easy task. Had we chosen a really microscopic ambience, the organic sensation would have suffered, and that's why we put red tints everywhere. In reality, the inside of a body would have been a lot darker. Thus we had to make a choice, favorizing the direction.

The Stand itself, Lovers, has a funnily ...cute side. Especially in the scene where they all shout "the most, most (...) fearsome of the Stands!" together. We even see two of them shoulder by shoulder, they seem to be friends.

The storyboard and direction were given to Fujimoto, who has skillfully worked with everything that had to be managed. Kakyoin and Polnareff fight side by side again, but it seems the latter is rather useless (laughs). The fight against Lovers is above all the victory of Kakyoin's smarts.

Let's note how much Jotaro believes in Kakyoin during the episode. "You don't know Kakyoin." With this line alone, the trust remains unshakeable.

As soon as Lovers is captured, Jotaro becomes cheerful again, satisfied to finally hit back. Dan had it coming by acting so odiously. The onslaught of ORA ORA following this is the longest in the series yet.
”
—Naokatsu Tsuda, Blu-Ray limited edition commentaries