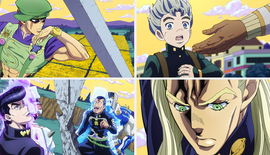 July 15th (Thursday), Part 1 (7月15日(木) その1, Shigatsu Jū-go-nichi (Moku) Sono 1)[1] is the thirty-first episode of Diamond is Unbreakable and the one hundred fifth episode of the JoJo's Bizarre Adventure anime. It covers Chapter 398 through Chapter 401, Chapter 405 and Chapter 412.

On July 15, the Stand Users at Yoshihiro Kira's service prepare a coordinated attack on the heroes. Josuke, Okuyasu and Mikitaka Hazekura discover that a man is living in a transmission tower.

Yoshihiro flies through Morioh, searching for his son Kira. After some deliberation, and realizing that Kira most likely disguised himself to avoid detection, Yoshihiro finds his son walking to work as Kosaku Kawajiri. However, Yoshihiro's happiness quickly turns to anger when he sees Hayato filming Kira. Knowing that Hayato seeks to expose his son, Yoshihiro flies off to create more Stand users.

Toyohiro Kanedaichi gazes at Josuke from a distance

The date is July 15, 1999, and there are many stories to tell. Be it a strange dark-skinned, white-haired man stalking Koichi and Tomoko, a weird-looking man in a trench coat hovering by Rohan's house, or Hayato seeking to expose his "father" for the faker he is after the Stray Cat incident. However, this particular story centers on Josuke and Okuyasu, who run into Mikitaka, still attesting that he's an extraterrestrial. Mikitaka points Josuke and Okuyasu in the direction of a defunct electrical pylon and reveals to them that there's a strange man living on it. The man takes notice of them, having expected their arrival. 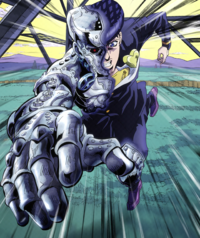 The man, Toyohiro Kanedaichi, greets Josuke and Okuyasu but warns them not to come too close to the pylon. Toyohiro explains that he bought the pylon from the electrical company and has turned it into his own self-sufficient home where he doesn't need to leave. However, a polaroid photo full of holes falls out of his pocket, and after examining it with Mikitaka (who has turned into a pair of binoculars via Earth Wind and Fire), Josuke sees that it is actually Atom Heart Father with Yoshihiro Kira inside. Realizing that Toyohiro is in league with Yoshikage Kira, Josuke runs up to the pylon, but finds himself unable to leave, lest he becomes a metal sculpture of himself. Toyohiro explains that the pylon is actually his Stand, Super Fly, an independent being that traps whoever steps inside it until another person enters. Having spent three years trapped inside Super Fly, Toyohiro gleefully makes his way along the inactive power lines to freedom. Josuke and Okuyasu use their Stands to try to pummel the tower until it breaks, only to find out too late that Super Fly absorbs and subsequently reflects any attack used on it. While Josuke isn't seriously harmed by the resulting flurry of his own punches, Okuyasu fails to avoid his own attacks in time and sustains a large gash in his side.

Suddenly, Mikitaka appears, having turned into one of the power lines, and directs Toyohiro back into Super Fly, allowing Josuke to escape. However, Toyohiro incapacitates Mikitaka, taking advantage of Super Fly's defense mechanism by cutting a power line so that the backlash is directed at the "alien". Toyohiro then nails Mikitaka to Super Fly with a set of bolts, aiming to trap him in the Stand and escape. Back in Morioh, Koichi and Tomoko have mysteriously vanished, the strange man by Rohan's house arrives at his door, and at school, Hayato expresses his desire to expose the man impersonating his father no matter what.

“
This episode is the first in a series of four, linking four arcs of the manga, going from the electric tower to Bites the Dust’s awakening.

The usage of the hour and date visible at the bottom of the screen helps to progressively bring the audience toward the final fight and the appearance of Bites the Dust. It also helps represent the chronological order between the scenes. It was quite a bold directing choice, don’t you think?

The hard part was having several Stand battles taking place simultaneously. That's why Yasuko Kobayashi was responsible for the writing from episode 31 to episode 34. On the other hand, the storyboard and direction were broken up for each individual event. Be it the electric tower, Enigma or the other Stand battles, each event had its own team. It was necessary, since I couldn't bear having the Stand designs change between episodes. At the same time, it simplifies the effort I have to put into explaining every detail for each event to the directors. That said, the editing and voice acting took a lot of time. (laughs) JoJo is one of those rare series that gives us the oppurtunity to work differently than usual.
”
—Naokatsu Tsuda, Blu-Ray limited edition commentaries