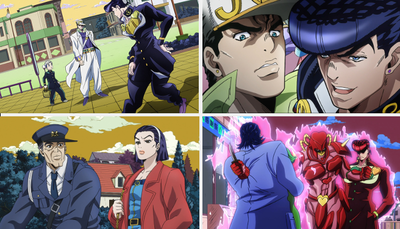 Jotaro Kujo! Meets Josuke Higashikata (空条承太郎！ 東方仗助に会う, Kūjō Jōtarō! Higashikata Jōsuke ni Au)[2] is the first episode of Diamond is Unbreakable and the seventy-fifth episode of the JoJo's Bizarre Adventure anime. It covers Chapter 266 through Chapter 269 of the manga.