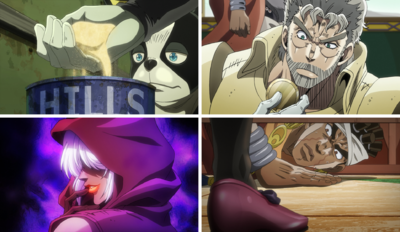 In Luxor, Joseph finds a peculiar power outlet and gets shocked. Unbeknownst to him, he is turned into a magnet by Mariah's ability and finds out how dangerous it is to have all metallic objects attracted to oneself.

Kakyoin is informed that the Speedwagon Foundation is taking over his medical treatment, allowing his eyes to heal faster.

Joseph notices a strange electrical socket in the the desert

Meanwhile, Jotaro and his companions have arrived in Luxor, a place known for its tombs dating back to ancient Egypt. Joseph has momentarily separated himself from his friends and is intimidated by the dry wind toilets of Egypt. Seeing a strange rock with an electrical socket in it, Joseph foolishly touches the socket only to get shocked. Mariah's trap has worked. Strange occurrences begin to happen around Joseph but the group suspects nothing until the next morning at the hotel, at which time Joseph finally notices in his room that he's been magnetized: all metal objects are now drawn to him.

Joseph becomes a human magnet from a Stand ability

Joseph quickly realizes he has become a human magnet as a result of yesterday's shock and tries to run to the hotel lobby and warn his friends. On the way, he's the victim of a few embarrassing situations (an old woman notably mistaking him as seducing her) and a few scares as a set of knives and forks fly toward him. On the escalator, he sees Mariah and her metallic strings tie Joseph to the mechanism of the escalator, threatening to crush his hands and strangle him.

Thankfully, Avdol rescues him by pushing the emergency stop button and the two team up to get rid of the enemy as soon as possible. Joseph and Avdol pursue Mariah into the ladies' restroom, only for Joseph's magnetism to get them into more trouble and they have to jump through a window to catch up to Mariah. As they continue their pursuit, Avdol realizes that he has also come under Bastet's influence while stopping the escalator, with both he and Joseph becoming stuck together due to their magnetism.

“
The beginning of the episode features Kakyoin again. The Speedwagon Foundation takes care of him for his eye injury and we learn that he'll recover sooner than expected.

We face a Stand attack from a mysterious assailant, and we had to insist on entertaining this mystery while increasing the tension around Joseph's condition. Nevertheless the first part is more about poop. Vulgar jokes typical of shonen mangas are in legions and contribute to the series' charm; if you want to call that "charm". (laughs).

The scene where the forks and knives rushed toward Joseph particularly affected me. We feel the power of the magnetism well, which is about to become a serious problem.

Except for the beginning, we never see Mariah's face again. So we have this interesting continuity with Joseph being attacked by this mysterious beautiful woman while his magnetism problem gradually gains in power. In the toilet scene, we see the old lady again; Toshiko Sawada's depiction of her is perfect.

The scene where Jotaro and Polnareff are waiting for Joseph and Avdol was added in the anime. We put it here to establish a better link with the next events.
”
—Naokatsu Tsuda, Blu-Ray limited edition commentaries