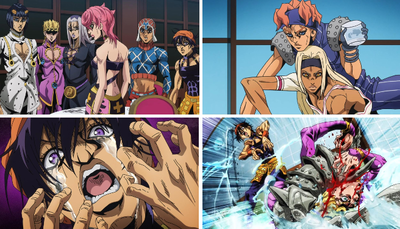 The "G" in Guts (ガッツの「G」, Gattsu no 'Jī')[1] is the twenty second episode of Golden Wind and the one hundred thirty fifth episode of the JoJo's Bizarre Adventure anime. The episode covers from Chapter 524 to Chapter 527 of the original manga.

Team Bucciarati has rebelled agains the Boss, as they try to discuss their next course of action and have lunch, Narancia discovers a shark swimming in his soup.

Passione's operatives, Tizzano and Squalo, observe the gang from afar

While everyone is distracted, Narancia discovers that his spoon has been destroyed by a small shark inside of his soup. He immediately summons Aerosmith and shoots at it but the shark disappears in the bowl only to reappear inside of the soup in his new spoon and jump to tear off his tongue. Narancia's throat starts to seize up and he cannot inform his team that the shark can teleport between liquids but he is saved from choking when Giorno stabs his trachea with a pen to let him breathe while he creates a new tongue. At the same time, a duo of Passione operative, Squalo and Tizzano, observe the scene from a balcony. Seeing Giorno's resourcefulness, Squalo notes that his Clash will not be enough to kill them all but that he and Tizzano plan to use Narancia to their advantage.

Narancia recovers from the wound but informs Bucciarati that the enemy Stand was a large rocky thing and that they should go through the canals. Insisting on this misinformation, Narancia is internally shocked that he cannot tell the truth and keeps feeding false intel to his companions. The group starts to believe the lies, forcing Narancia to try to stop Giorno from boarding their boat. Bucciarati decides to tackle the enemy and tells Abbacchio to use Moody Blues to track them. However, Narancia realizes that Moody Blues will be in grave danger in the water. When Clash appears in the canal, Narancia points at it, only for his arm to point at the bathrooms. Annoyed at Narancia's antics, Team Bucciarati enters the bathroom where Clash has many water sources to attack from. Crying from despair, Narancia vows to make his enemy pay as is it revealed that Tizzano has set up his Talking Head, a small Stand having attached itself to Narancia's tongue and forcing him to tell lies.

“
This is the episode where Trish, who barely even knew why she was being led around, finally exclaims, "I want to know whose blood courses through my veins!" Not only was it a turning point for her, it was also a a turning point for me. I also adore Narancia and his sudden switch from being manipulated by Talking Head to his panicking inner self.
”
—Sayaka Senbongi, Blu-Ray limited edition commentaries
“
I got shivers watching the second opening on television. It was my first time watching it, so it felt strange knowing that people around the world were experiencing it with me. I really pushed myself recording, and producer Hiroyuki Omori told me that the staff worked on it until right before the broadcast delivery. I guess we were all under pressure!
”
—Daisuke Hasegawa, Blu-Ray limited edition commentaries
“
1. Venice in the Afternoon

The previous episodes took place around dawn, but by this episode, the sun has risen and the streets of Venice are in full view. Producer Kasama explains the color of the water: "I pictured Venice as a beautiful city on the water, but after actually going there, I saw that the water is really a murky green."

2. Narancia Backed into a Corner

Talking Head forces Narancia to say the opposite of what he means. The manga portrays the whole ordeal more comically, but Kasama decided to reinterpret the mood by shifting it to Narancia's point of view, adding suspense to the scene.

The title references a chapter from volume 56 of the manga. The "G" formed by Giorno and the others was memorable, and the staff initially wanted to add it in the anime. "It never made it past the brainstorming phase, but in a different timeline, the first shot of the second opening might have featured that 'G' shape..."

Bodies pressed against each other, Squalo and Tizzano left quite an impact. "We based it on the manga panels, but with the addition of Maeno and Tsuda's voices and the slow, deliberate animation, it immediately felt suggestive." Kasama recalls that amongst the female staff, Melone stands heads above the rest, but this duo was also a staff favorite.
”
—Nobutaka Kasama, Blu-Ray limited edition commentaries