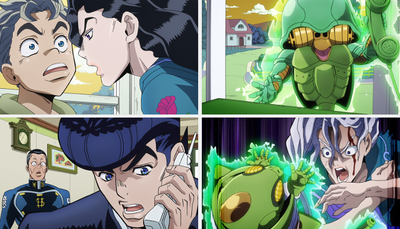 Yukako Yamagishi Falls in Love, Part 2 (山岸由花子は恋をする その2, Yamagishi Yukako wa Koi o Suru Sono 2)[1] is the ninth episode of Diamond is Unbreakable and the eighty-third episode of the JoJo's Bizarre Adventure anime. It covers the last few pages of Chapter 297 through Chapter 302 of the manga.

Yukako Yamagishi has kidnapped Koichi. Imprisoned in an unknown house, Koichi must find a way to warn his friends and escape this house.

Josuke and Okuyasu are investigating Koichi's disappearance and Josuke reasons Yukako has kidnapped him and that they need to hurry before it becomes a life and death situation for Koichi. Meanwhile, Koichi cannot open the lock to the bathroom, causing him to wet himself. Ashamed, he tries to dissuade Yukako from liking him but it fails as she still sees something shining within him and even says she is happy to do his laundry. She shows him the electric chair she is building for his dinner study time, causing him to worry about what will become of him.

She goes out to order olive oil and Koichi reasons there must be a pay phone nearby, which is luckily within 48 meters (Echoes has a range of 50). Unfortunately, he does not have a 10 yen coin to pay for the call to Josuke and reasons that if he calls the police Yukako would simply kill them. Meanwhile, Josuke reasons Koichi is in an isolated area with few people since his Stand has a range of 50 meters and he hasn't been able to call for help. Yukako approaches Koichi and figures out he knows about the pay phone but warns him he cannot escape. As she goes to the pay phone to order, Koichi manages to use Echoes to make the calling noises of the phone (so long as the phone hears the sound of the button the call will go through) and manages to call Josuke as he and Okuyasu are trying to find his location.

Yukako realizes Koichi has a Stand and hangs up, but not before Josuke hears the sound of waves, allowing him to figure out Koichi's location. Yukako approaches the house as Koichi barricades the door with a shoe cabinet and the electric chair from earlier while nailing them to the door. While Yukako is happy that the two have powers as it further deepens the "bond between them", Koichi uses Echoes to produce the sound "I hate you" from all over her body. Yukako is so stubborn in her delusions that the sound has no effect.

She tries to open the door but is shocked by the doorknob, which was rigged with the electric chair. Angry at this act of defiance, Yukako manipulates the hair she implanted in Koichi's scalp to thrust him against the door to open it. She uses her Stand Love Deluxe to surround the house in hair and prepares to attack. However, due to the stress Koichi's Stand "dies". Koichi mourns for Echoes, as he believes he pushed his Stand too hard and killed it, but Yukako manages to see that the Stand is not dying but was evolving and worried, moves the shoe cabinet away from the door and angrily asks Koichi what is happening to his Stand.

Koichi then realizes that his Stand is not dying but has evolved into Echoes ACT2 and Yukako is suddenly blown away from the door. Koichi notices sound effects on the door and realizes he was hoping for her to be blown away and since the door has the words blown away on it she flew. Okuyasu and Josuke arrive at the area where Koichi is captured and notices many villas. Josuke suggests to Okuyasu to search for the pay phone since Koichi called from there. Yukako proclaims Koichi is hers approaches the house once more and sees that Koichi has cut off his hair in order to remove the hair she implanted in his scalp. He warns her not to come closer and that she can't beat him, causing her to become enraged as she believes he is getting too cocky and that he belongs to her and shouldn't defy her. She comes to the house but burns her hand on the stair rail as Koichi implanted the word sizzle on it, causing the rail to feel hot. 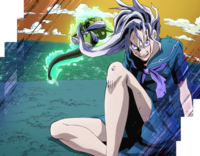 Yukako becomes even more enraged and threatens to kill Koichi if he does not say "I love you" to her. He refuses and once more pronounces his hatred of her. She uses her hair Stand to grab onto Koichi, only to realize he implanted words on himself, causing Yukako to once more fly away. The stress of the battle causes her hair to turn white and Koichi approaches her to make sure she is alive. While he is relieved she didn't die, Yukako awakens and captures Koichi's Stand, threatening to tear it apart since she can't touch Koichi herself, slicing part of Echoes' tail and throwing it in the ocean. However, Koichi warns her the ground is unstable as Echoes not only heard Yukako's heartbeat as he approached her to ensure she was alive but also heard the ground giving out.

Yukako and Echoes fall and as she is about to be pierced by a rock, Yukako is bounced safely to the surface. She realizes that as she was trying to kill him that Koichi had already come up with a plan to ensure she would be saved and implanted the "Boing" sound when she tore off part of Echoes tail and threw it near the rock. Koichi mentions how she didn't listen to him and leaves while Yukako realizes she lost from the beginning and is even happier than before as she loves him more than ever and doesn't care if he doesn't notice her as she is happy just thinking of him. Josuke and Okuyasu catch up to him after his fight and ensure he is okay. They also notice Yukako with her white hair and that she is smiling while looking in their direction causing them to panic and try to leave. Meanwhile, some fishermen who saw Yukako fall and bounce right back up name the area Boing-Boing Cape, with a rumor going around that a girl who tried to commit suicide was bounced right back up and became a popular fisherman spot. Some time later, Koichi is given another English note, having this time scored a perfect grade, yet he is unsure about how to feel about this.

“
This episode marks the first appearance of "Echoes Act 2". Act 1 had a difficult power to represent on screen, but this time the difficulty is taken up a notch since the sound is now materialized.

The series director, Toshiyuki Kato, was in charge of the storyboard and the result was brilliant. I’m beginning to think I’m counting a little too much on him (laughs). Koichi reaches another level in awakening his Stand ability, and he looks alot cooler now. We finally understand why Yukako is attracted to him. Nonetheless, she remains a terrible person and even calls Koichi a “pissy pants” after the incident with the toilet in the episode's introduction. She’s terrible (laughs)! But she did manage to rightly judge the boy and see the man he would become. She must have an eye for that.

Episode 8 and 9 are worthy of being apart of 'Part 4' and pride themselves on their suspense. Will Koichi fall for Yukako? Will he get killed? Is there another way out? I remember during the weekly publication, when we couldn’t read the following story yet, the tension was at its highest. And to see a main character like Josuke ending up completely useless was something quite new. “You guys took your time” Koichi says to them. But it’s worse than that, they completely missed the train (laughs)!