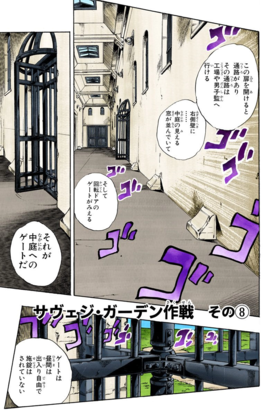 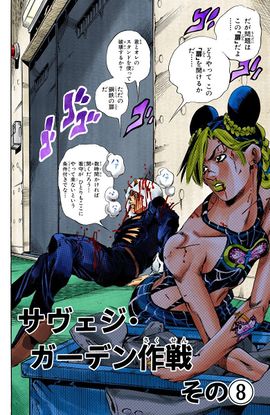 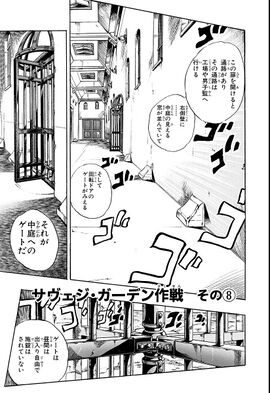 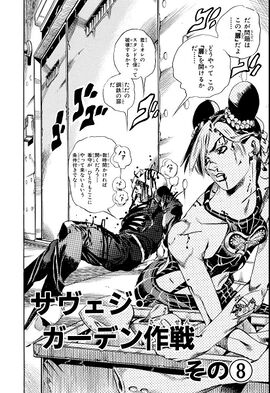 After defeating Lang, Weather asks Jolyne how they will get into the courtyard from the factory. He states that there is a revolving door and asks if they will simply go through it, or break it down with their Stands. Jolyne tells him they'll fool a guard into opening it by using Lang's entry pass. Jolyne approaches the factory door and hears someone on the other side, Weather hiding behind a barrel as Jolyne knocks on the door. She scans the entry pass and shows the camera Lang's helmet. A voice comes from the scanner and asks if this is Lang knocking.

The door opens slightly, Father Pucci on the other side. Believing he is talking to Lang, Pucci requests Jolyne to return to the chapel with him. When no reply is offered, Pucci turns around to see not Lang, but Jolyne. Jolyne recognizes his clothes as a priest's garb as he tries to set off the alarm. Jolyne convinces him not to, but Pucci asks why Jolyne used Lang's pass. Jolyne, unaware that Pucci is Whitesnake, responds that Lang had assaulted her, and she fought him out of self-defense. She requests he let her go to the courtyard for a minute before alerting the authorities. Pucci asks if Jolyne is alone, and she lies stating that she is.