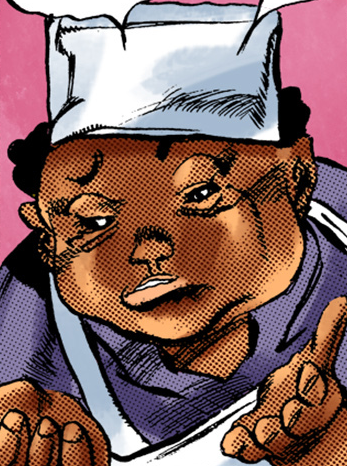 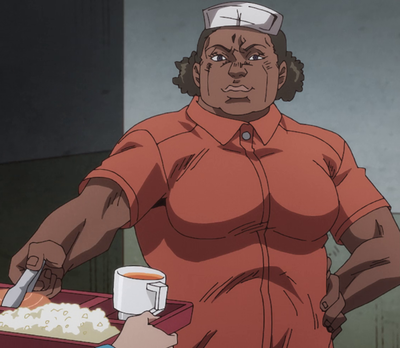 SO Episode 2
The Curly-Haired Prisoner (女囚のパーマ, Joshū no pāma, lit. "Female Prisoner with Perm") is an unnamed tertiary character featured in the sixth part of the JoJo's Bizarre Adventure series, Stone Ocean.

The convict serves as the caterer in the cafeteria of Green Dolphin Street Prison and tells Jolyne about several of the prison's "seven wonders".

The convict is an average looking, dark-skinned and overweight woman with a somewhat rectangular head. she has curly hair styled as a perm hairstyle. The convict is shown wearing a dark shirt and pants with a bright apron and chef's hat as part of her duties as Prison Caterer.

The series is known for alternating colors between media, the information presented below may or may not be canon.
Skin(Brown)
Hair(Black, dark yellow reflections)
Eyes(Blue)
Outfit
(Yellow shirt, purple jacket with a white apron and hat, Brown pants and black shoes.)
Skin(Brown)
Hair(Dark Brown)
Eyes(Dark Purple)
Outfit
(Orange shirt with a grey apron and hat, Dark blue pants and shoes.)

The convict isn't a tough person to sway to one's side

The convict seems to have somewhat of a rude personality, pushing Jolyne away from using the prison phone to call her mom, chalking it up to having phone reservations as one of the "Seven wonders of Green Dolphin Street Prison".


Despite this, the convict does appear to handle her occupation of Caterer rather well, serving food to fellow inmates and helping F.F. understand what the opposite of pork is when the latter wants to do things opposite of what Atroe used to do.


In addition, the convict can be easily swayed to one's side using a few dollars, for example, giving away her spot in the phone line to another inmate for 20$, as well as providing an additional seat and "complimentary drink" (taken from another inmate) for 100$.

The convict is first seen in the prison's cafeteria, explaining to Jolyne that while she's free to sleep and come eat late, that means she won't have any remaining meals to eat by the time of arrival, explaining it to be one of the seven wonders of the prison. In addition, the convict tells Jolyne there are also packed meals for inmates who go to work in the morning, this being another one of the seven wonders.[1]

The convict is shown again later on, pushing Jolyne away from the prison phone's queue, explaining the phones are reservation only, and that the current waiting time is one month, explaining it to be another one of the seven wonders of the prison. Despite the long waiting time, the convict sells her spot in the queue to another inmate for 20$.[2]
The convict makes two appearances in the Marilyn Manson arc, one of them being exclusive to the anime: in the prison courtyard, threatening F.F. after she keeps interrupting her game of catch with another inmate.[3]

The information below derives from the Stone Ocean TV anime which was not written by Araki. As such, it may not be considered canon.
[skip section]

And another short cameo when Jolyne and F.F. pursue Miraschon, she is seen talking to a fellow inmate before the prison guard tells the inmates to return to their cells and prepare for a rollcall.[4]

The convict appears once again, telling Jolyne off after the latter pushes her in the phone queue. the convict begins to threaten her before noticing Jolyne is offering her 100$ for her spot in the queue. she then proceeds to offer Jolyne a chair to sit on so she won't get tired standing at the booth, as well as a "complimentary" drink stolen from another inmate.[5]

The convict makes two additional smaller appearances in subsequent arcs: One time when she tells F.F. that if she wants to try the opposite of pork, she should eat salmon, as unlike a pig, who lives lazily, a salmon fish swims against the current and conquers it.[6] The two and last appearance occurs when Jolyne is affected by Miuccia Miuller's Stand ability, Jail House Lock. The convict yells at Jolyne to show her meal ticket and warns her not to try and steal food[7]