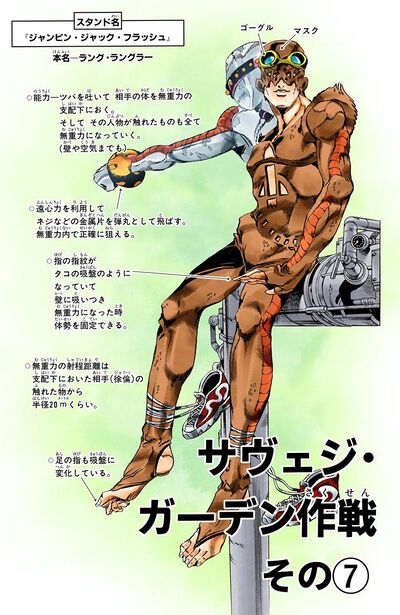 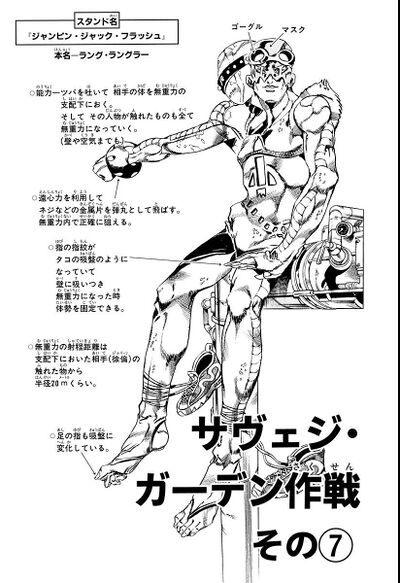 Lang Rangler shoots his projectiles, hitting Jolyne and piercing her cloud suit. Confident in his ability, Lang Rangler considers killing Whitesnake next. However, Lang Rangler notices string wrapped around him. The screws that hit Jolyne are tethered to string, none of which actually hit her.

Jolyne reveals that she had hidden her string amongst Lang Rangler's ammo. She uses the string to pull Lang Rangler towards her, into the vacuum. Without Weather's cloud suit, Lang Rangler's blood quickly begins to boil. Before he can die, Lang Rangler pulls out a bottle filled with peroxide and mixes it with manganese dioxide, creating oxygen. He throws the bottle at Jolyne.

The bottle bursts, destroying her cloud suit, but before she can die, Weather comes and gives his suit to her. In order to escape, Lang Rangler releases the zero gravity, forcing in a burst of air. However, he is too late. The air pushes him toward Jolyne—and, more specifically, into Stone Free's fist. Jolyne pummels him and retrieves Jotaro's Stand Disc.