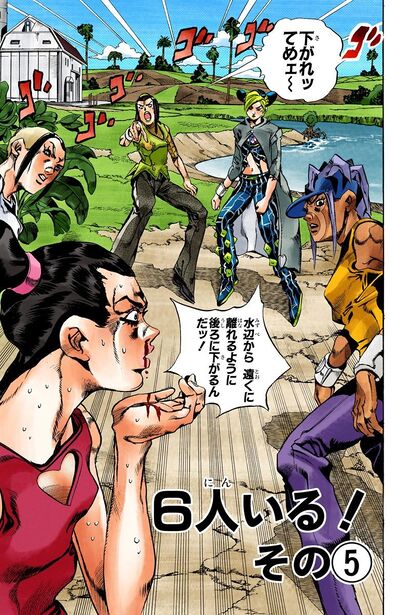 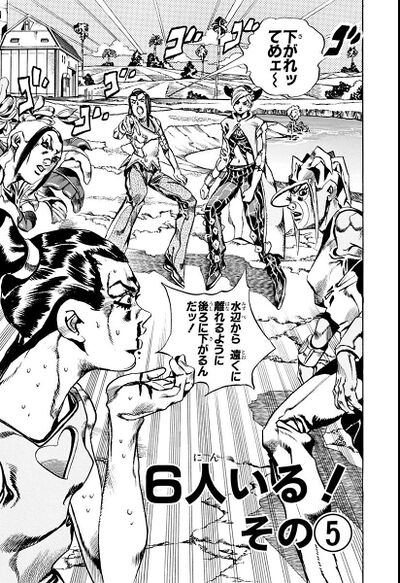 Ermes suspects that the inmate with a nose bleed is the Stand user. The nose bleed girl claims that the tan inmate hit her, pointing at the blood on her hand. The tan girl states that she remembers Ermes mocking Loccobarocco when he formed the search team. The other inmates claim the same thing. Tired of getting nowhere, Jolyne punches the nosebleeder in the face, knocking her out.

Jolyne decides to knock all of them out, but is stopped by the inmate with a shaved head. All three inmates' eyes go black, and they begin to talk in unison. They talk about Whitesnake and consider keeping the two alive so he can take their Stands. Jolyne uses Stone Free to punch one of them out, and the prisoners begin melting into black goop. The tan inmate melts into Foo Fighters, explaining that it created that body out of the missing prisoners, and that the other two were possessed when they inspected the tractor. In Foo Fighters' head are two discs, stating that its job is to guard Whitesnake's Stand Discs.

Ermes suggests that they run into the field, away from the water. Jolyne, having figured out that F.F. is its own user, explains that they have to keep it away from water. Ermes claims that cannot be true, and that F.F. is nothing more than a mass of plankton. F.F. uses Fred Hoyle's theories to explain how it has sentience, then runs toward the barn in order to hide the discs. The double in the water goes after the guard in order to force the bracelets to explode.